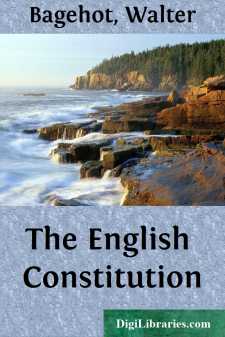 There is a great difficulty in the way of a writer who attempts to sketch a living Constitution—a Constitution that is in actual work and power. The difficulty is that the object is in constant change. An historical writer does not feel this difficulty: he deals only with the past; he can say definitely, the Constitution worked in such and such a manner in the year at which he begins, and in a manner in such and such respects different in the year at which he ends; he begins with a definite point of time and ends with one also. But a contemporary writer who tries to paint what is before him is puzzled and a perplexed: what he sees is changing daily. He must paint it as it stood at some one time, or else he will be putting side by side in his representations things which never were contemporaneous in reality. The difficulty is the greater because a writer who deals with a living Government naturally compares it with the most important other living Governments, and these are changing too; what he illustrates are altered in one way, and his sources of illustration are altered probably in a different way. This difficulty has been constantly in my way in preparing a second edition of this book. It describes the English Constitution as it stood in the years 1865 and 1866. Roughly speaking, it describes its working as it was in the time of Lord Palmerston; and since that time there have been many changes, some of spirit and some of detail. In so short a period there have rarely been more changes. If I had given a sketch of the Palmerston time as a sketch of the present time, it would have been in many points untrue; and if I had tried to change the sketch of seven years since into a sketch of the present time, I should probably have blurred the picture and have given something equally unlike both.

The best plan in such a case is, I think, to keep the original sketch in all essentials as it was at first written, and to describe shortly such changes either in the Constitution itself, or in the Constitutions compared with it, as seem material. There are in this book various expressions which allude to persons who were living and to events which were happening when it first appeared; and I have carefully preserved these. They will serve to warn the reader what time he is reading about, and to prevent his mistaking the date at which the likeness was attempted to be taken. I proceed to speak of the changes which have taken place either in the Constitution itself or in the competing institutions which illustrate it.

It is too soon as yet to attempt to estimate the effect of the Reform Act of 1867. The people enfranchised under it do not yet know. their own power; a single election, so far from teaching us how they will use that power, has not been even enough to explain to them that they have such power. The Reform Act of 1832 did not for many years disclose its real consequences; a writer in 1836, whether he approved or disapproved of them, whether he thought too little of or whether he exaggerated them, would have been sure to be mistaken in them. A new Constitution does not produce its full effect as long as all its subjects were reared under an old Constitution, as long as its statesmen were trained by that old Constitution. It is not really tested till it comes to be worked by statesmen and among a people neither of whom are guided by a different experience.

In one respect we are indeed particularly likely to be mistaken as to the effect of the last Reform Bill. Undeniably there has lately been a great change in our politics. It is commonly said that "there is not a brick of the Palmerston House standing". The change since 1865 is a change not in one point but in a thousand points; it is a change not of particular details but of pervading spirit. We are now quarrelling as to the minor details of an Education Act; in Lord Palmerston's time no such Act could have passed. In Lord Palmerston's time Sir George Grey said that the disestablishment of the Irish Church would be an "act of Revolution"; it has now been disestablished by great majorities, with Sir George Grey himself assenting. A new world has arisen which is not as the old world; and we naturally ascribe the change to the Reform Act. But this is a complete mistake. If there had been no Reform Act at all there would, nevertheless, have been a great change in English politics. There has been a change of the sort which, above all, generates other changes—a change of generation. Generally one generation in politics succeeds another almost silently; at every moment men of all ages between thirty and seventy have considerable influence; each year removes many old men, makes all others older, brings in many new. The transition is so gradual that we hardly perceive it. The board of directors of the political company has a few slight changes every year, and therefore the shareholders are conscious of no abrupt change....