The End of the World A Love Story 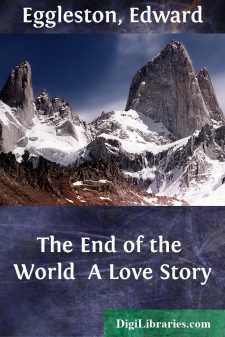 PREFACE. [IN THE POTENTIAL MOOD.]

It is the pretty unanimous conclusion of book-writers that prefaces are most unnecessary and useless prependages, since nobody reads them. And it is the pretty unanimous practice of book-writers to continue to write them with such pains and elaborateness as would indicate a belief that the success of a book depends upon the favorable prejudice begotten of u graceful preface. My principal embarrassment is that it is not customary for a book to have more than one. How then shall I choose between the half-dozen letters of introduction I might give my story, each better and worse on many accounts than either of the others? I am rather inclined to adopt the following, which might for some reasons be styled the

Perhaps no writer not infatuated with conceit, can send out a book full of thought and feeling which, whatever they may be worth, are his own, without a parental anxiety in regard to the fate of his offspring. And there are few prefaces which do not in some way betray this nervousness. I confess to a respect for even the prefatory doggerel of good Tinker Bunyan--a respect for his paternal tenderness toward his book, not at all for his villainous rhyming. When I saw, the other day, the white handkerchiefs of my children waving an adieu as they sailed away from me, a profound anxiety seized me. So now, as I part company with August and Julia, with my beloved Jonas and my much-respected Cynthy Ann, with the mud-clerk on the Iatan, and the shaggy lord of Shady-Hollow Castle, and the rest, that have watched with me of nights and crossed the ferry with me twice a day for half a year--even now, as I see them waving me adieu with their red silk and "yaller" cotton "hand-kerchers," I know how many rocks of misunderstanding and criticism and how many shoals of damning faint praise are before them, and my heart is full of misgiving.

--But it will never do to have misgivings in a preface. How often have publishers told me this! Ah! if I could write with half the heart and hope my publishers evince in their advertisements, where they talk about "front rank" and "great American story" and all that, it would doubtless be better for the book, provided anybody would read the preface or believe it when they had read it. But at any rate let us not have a preface in the minor key.

A philosophical friend of mine, who is addicted to Carlyle, has recommended that I try the following, which he calls

Why should I try to forestall the Verdict? Is it not foreordained in the very nature of a Book and the Constitution of the Reader that a certain very Definite Number of Readers will misunderstand and dislike a given Book? And that another very Definite Number will understand it and dislike it none the less? And that still a third class, also definitely fixed in the Eternal Nature of Things, will misunderstand and like it, and, what is more, like it only because of their misunderstanding? And in relation to a true Book, there can not fail to be an Elect Few who understand admiringly and understandingly admire....