The End of the Tether 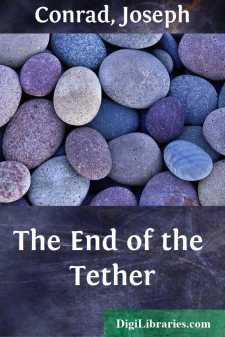 For a long time after the course of the steamer Sofala had been altered for the land, the low swampy coast had retained its appearance of a mere smudge of darkness beyond a belt of glitter. The sunrays seemed to fall violently upon the calm sea—seemed to shatter themselves upon an adamantine surface into sparkling dust, into a dazzling vapor of light that blinded the eye and wearied the brain with its unsteady brightness.

Captain Whalley did not look at it. When his Serang, approaching the roomy cane arm-chair which he filled capably, had informed him in a low voice that the course was to be altered, he had risen at once and had remained on his feet, face forward, while the head of his ship swung through a quarter of a circle. He had not uttered a single word, not even the word to steady the helm. It was the Serang, an elderly, alert, little Malay, with a very dark skin, who murmured the order to the helmsman. And then slowly Captain Whalley sat down again in the arm-chair on the bridge and fixed his eyes on the deck between his feet.

He could not hope to see anything new upon this lane of the sea. He had been on these coasts for the last three years. From Low Cape to Malantan the distance was fifty miles, six hours' steaming for the old ship with the tide, or seven against. Then you steered straight for the land, and by-and-by three palms would appear on the sky, tall and slim, and with their disheveled heads in a bunch, as if in confidential criticism of the dark mangroves. The Sofala would be headed towards the somber strip of the coast, which at a given moment, as the ship closed with it obliquely, would show several clean shining fractures—the brimful estuary of a river. Then on through a brown liquid, three parts water and one part black earth, on and on between the low shores, three parts black earth and one part brackish water, the Sofala would plow her way up-stream, as she had done once every month for these seven years or more, long before he was aware of her existence, long before he had ever thought of having anything to do with her and her invariable voyages. The old ship ought to have known the road better than her men, who had not been kept so long at it without a change; better than the faithful Serang, whom he had brought over from his last ship to keep the captain's watch; better than he himself, who had been her captain for the last three years only. She could always be depended upon to make her courses. Her compasses were never out. She was no trouble at all to take about, as if her great age had given her knowledge, wisdom, and steadiness. She made her landfalls to a degree of the bearing, and almost to a minute of her allowed time. At any moment, as he sat on the bridge without looking up, or lay sleepless in his bed, simply by reckoning the days and the hours he could tell where he was—the precise spot of the beat. He knew it well too, this monotonous huckster's round, up and down the Straits; he knew its order and its sights and its people....