The End of the Rainbow 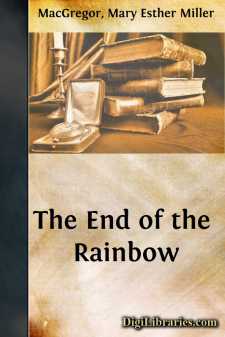 All afternoon the little town had lain dozing under the lullaby of a June rain. It was not so much a rain as a gentle dewy mist, touching the lawns and gardens and the maple trees that lined each street into more vivid green, and laying a thick moist carpet over the dust of the highways. And the little town, ringed by forest and lake, and canopied by maple boughs, had lain there enjoying it, now blinking half-awake in the brief glimpses of sunlight, now curling up again and going to sleep.

In the late afternoon the silent tournament between sunshine and shadow resulted in a conquest for the sun. His victorious lances swept the enemy from the clean blue skies; they glanced over the lake, lodged in every treetop, and glittered from every church spire. The little town began to stir. The yellow dogs, that had slept all afternoon on the shop steps, roused themselves and resumed their fight in the middle of Main Street. Now and then a clerk ran across to a rival firm to get change for a customer. A few belated shoppers hurried homeward. A farmer's double-buggy backed out of the hotel yard with a scraping sound, and went rattling up the street towards the country. Everything seemed pervaded with an atmosphere of expectancy, a tense air of unrest, as though the whole place were holding itself in readiness for a summons.

And then it came: the great consummation of the day's work. From the tower of the fire-hall burst forth the loud peal of the town bell. Six o'clock! Like the castle of the Sleeping Beauty the town leaped into life. The whistles of the saw-mills down by the lake broke into shrieks of joy. The big steam pipe of Thornton's foundry responded with a delighted roar. The flour mill, the wheel-factory and the tannery joined in a chorus of yells. From factory and shop, office and store, came pouring forth the relieved workers, laughing and calling across the street to each other above the din. There was a noisy tramp, tramp of feet, a hurrying this way and that, a confusion of happy voices. And over all the clamour, the big bell in the tower continued to fling out far over the town and the lake and the woods the joyous refrain that the day's work was done, was done, was done.

Near the corner of Main Street, on a leafy thoroughfare that ran up into the region of lawns and gardens, stood a neat row of red-brick office buildings, with wide doors and shiny windows. Over the widest door and on the shiniest window, in letters of gold, was the legend: EDWARD BRIANS, Barrister, etc.

Never a man passed this door on his homeward way without saluting it.

No one appeared in response to the summons; but from within came refusals, roared out in a thunderous voice, each roar growing more exasperated than the last.

The streets were almost deserted when, at last, the owner of the big voice came to his door. He was a man of about thirty-five; of middle height, straight, strong and alert....