The Elements of General Method Based on the Principles of Herbart 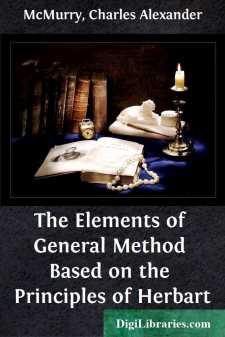 THE CHIEF AIM OF EDUCATION.

What is the central purpose of education? If we include under this term all the things commonly assigned to it, its many phases as represented by the great variety of teachers and pupils, the many branches of knowledge and the various and even conflicting methods in bringing up children, it is difficult to find a definition sufficiently broad and definite to compass its meaning. In fact we shall not attempt in the beginning to make a definition. We are in search not so much of a comprehensive definition as of a central truth, a key to the situation, an aim that will simplify and brighten all the work of teachers. Keeping in view the end from the beginning, we need a central organizing principle which shall dictate for teacher and pupil the highway over which they shall travel together.

We will assume at least that education means the whole bringing up of a child from infancy to maturity, not simply his school training. The reason for this assumption is that home, school, companions, environment, and natural endowment, working through a series of years, produce a character which is a unit as the resultant of these different influences and growths. Again, we are compelled to assume that this aim, whatever it is, is the same for all.

Now what will the average man, picked up at random, say to our question: What is the chief end in the education of your son? A farmer wishes his boy to read, write, and cipher, so as to meet successfully the needs of a farmer's life. The merchant desires that his boy get a wider reach of knowledge and experience so as to succeed in a livelier sort of business competition. A university professor would lay out a liberal course of training for his son so as to prepare him for intellectual pursuits among scholars and people of culture. This utilitarian view, which points to success in life in the ordinary sense, is the prevailing one. We could probably sum up the wishes of a great majority of the common people by saying, "They desire to give their children, through education, a better chance in life than they themselves have had." Yet even these people, if pressed to give reasons, would admit that the purely utilitarian view is a low one and that there is something better for every boy and girl than the mere ability to make a successful living.

Turn for a moment to the great systems of education which have held their own for centuries and examine their aims. The Jesuits, the Humanists, and the Natural Scientists all claimed to be liberal, culture-giving, and preparatory to great things; yet we only need to quote from the histories of education to show their narrowness and incompleteness. The training of the Jesuits was linguistic and rhetorical, and almost entirely apart from our present notion of human development. The Humanists or Classicists who for so many centuries constituted the educational elite, belonged to the past with its glories rather than to the age in which they really lived. Though standing in a modern age, they were almost blind to the great problems and opportunities it offered....