The Elements of Botany For Beginners and For Schools 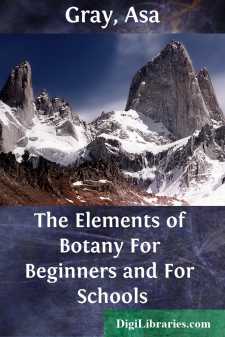 1. Botany is the name of the science of the vegetable kingdom in general; that is, of plants.

2. Plants may be studied as to their kinds and relationships. This study is Systematic Botany. An enumeration of the kinds of vegetables, as far as known, classified according to their various degrees of resemblance or difference, constitutes a general System of plants. A similar account of the vegetables of any particular country or district is called a Flora.

3. Plants may be studied as to their structure and parts. This is Structural Botany, or Organography. The study of the organs or parts of plants in regard to the different forms and different uses which the same kind of organ may assume,—the comparison, for instance, of a flower-leaf or a bud-scale with a common leaf,—is Vegetable Morphology, or Morphological Botany. The study of the minute structure of the parts, to learn by the microscope what they themselves are formed of, is Vegetable Anatomy, or Histology; in other words, it is Microscopical Structural Botany. The study of the actions of plants or of their parts, of the ways in which a plant lives, grows, and acts, is the province of Physiological Botany, or Vegetable Physiology.

4. This book is to teach the outlines of Structural Botany and of the simpler parts of the physiology of plants, that it may be known how plants are constructed and adapted to their surroundings, and how they live, move, propagate, and have their being in an existence no less real, although more simple, than that of the animal creation which they support. Particularly, this book is to teach the principles of the structure and relationships of plants, the nature and names of their parts and their modifications, and so to prepare for the study of Systematic Botany; in which the learner may ascertain the name and the place in the system of any or all of the ordinary plants within reach, whether wild or cultivated. And in ascertaining the name of any plant, the student, if rightly taught, will come to know all about its general or particular structure, rank, and relationship to other plants.

5. The vegetable kingdom is so vast and various, and the difference is so wide between ordinary trees, shrubs, and herbs on the one hand, and mosses, moulds, and such like on the other, that it is hardly possible to frame an intelligible account of plants as a whole without contradictions or misstatements, or endless and troublesome qualifications. If we say that plants come from seeds, bear flowers, and have roots, stems, and leaves, this is not true of the lower orders. It is best for the beginner, therefore, to treat of the higher orders of plants by themselves, without particular reference to the lower.

6. Let it be understood, accordingly, that there is a higher and a lower series of plants; namely:—

Phanerogamous Plants, which come from seed and bear flowers, essentially stamens and pistils, through the co-operation of which seed is produced. For shortness, these are commonly called Phanerogams, or Phænogams, or by the equivalent English name of Flowering Plants.

Cryptogamous Plants, or Cryptogams, come from minute bodies, which answer to seeds, but are of much simpler structure, and such plants have not stamens and pistils. Therefore they are called in English Flowerless Plants. Such are Ferns, Mosses, Algæ or Seaweeds, Fungi, etc. These sorts have each to be studied separately, for each class or order has a plan of its own....