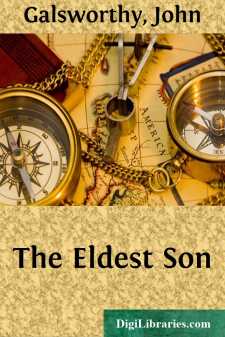 ACT I SCENE I The scene is a well-lighted, and large, oak-panelled hall, withan air of being lived in, and a broad, oak staircase. Thedining-room, drawing-room, billiard-room, all open into it; andunder the staircase a door leads to the servants' quarters. Ina huge fireplace a log fire is burning. There are tiger-skinson the floor, horns on the walls; and a writing-table againstthe wall opposite the fireplace. FREDA STUDDENHAM, a pretty,pale girl with dark eyes, in the black dress of a lady's-maid,is standing at the foot of the staircase with a bunch of whiteroses in one hand, and a bunch of yellow roses in the other. Adoor closes above, and SIR WILLIAM CHESHIRE, in evening dress,comes downstairs. He is perhaps fifty-eight, of strong build,rather bull-necked, with grey eyes, and a well-coloured face,whose choleric autocracy is veiled by a thin urbanity. Hespeaks before he reaches the bottom.

SIR WILLIAM. Well, Freda! Nice roses. Who are they for?

FREDA. My lady told me to give the yellow to Mrs. Keith, Sir William, and the white to Miss Lanfarne, for their first evening.

SIR WILLIAM. Capital. [Passing on towards the drawing-room] Your father coming up to-night?

SIR WILLIAM. Be good enough to tell him I specially want to see him here after dinner, will you?

SIR WILLIAM. By the way, just ask him to bring the game-book in, if he's got it.

He goes out into the drawing-room; and FREDA stands restlesslytapping her foot against the bottom stair. With a flutter ofskirts CHRISTINE KEITH comes rapidly down. She is anice-looking, fresh-coloured young woman in a low-necked dress.

CHRISTINE. Hullo, Freda! How are YOU?

FREDA. Quite well, thank you, Miss Christine—Mrs. Keith, I mean. My lady told me to give you these.

CHRISTINE. [Taking the roses] Oh! Thanks! How sweet of mother!

FREDA. [In a quick, toneless voice] The others are for Miss Lanfarne. My lady thought white would suit her better.

CHRISTINE. They suit you in that black dress.

What do you think of Joan's engagement?

FREDA. It's very nice for her.

CHRISTINE. I say, Freda, have they been going hard at rehearsals?

CHRISTINE. I do hate learning a part. Thanks awfully for unpacking. Any news?

FREDA. [In the same quick, dull voice] The under-keeper, Dunning, won't marry Rose Taylor, after all.

CHRISTINE. What a shame! But I say that's serious. I thought there was—she was—I mean——

FREDA. He's taken up with another girl, they say.

FREDA. [With a swift upward look] Yes, by the six-forty.

RONALD KEITH comes slowly down, a weathered firm-lipped man, inevening dress, with eyelids half drawn over his keen eyes, andthe air of a horseman.

KEITH. Hallo! Roses in December. I say, Freda, your father missed a wigging this morning when they drew blank at Warnham's spinney. Where's that litter of little foxes...?