The Educated Negro and His Mission The American Negro Academy. Occasional Papers No. 8 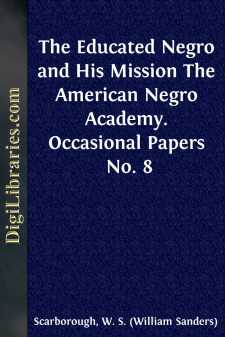 The Educated Negro and His Mission.

Human thought is like a pendulum. It sways from belief to belief, from theory to theory, from plan to plan, and the length of its vibrations is governed by a multitude of contending forces operating from both within and without. Two of these influences, in the present age, are all potential. One is the ardent desire to find the best ways and means by which the human race may hasten on its varied development, and the other is the strenuous determination to discover what may be styled the “Northwest” passage to that coveted result.

The consequence is that, in this determined reach for all that humanity craves for itself and for its civilization, the oscillations of thought and endeavor are oftimes marked by notable extremes. Especially has this been true in lines of education. Again and again has it been sought to wheel the educational car upon new tracks where exaggerated views, revolutionary ideas, radical methods have caused the eyes of the world to be focused upon the attempt, and no movement within the arc that the world’s opinions have traversed has been unnoticed.

These changing sentiments in regard to education have been most noticeable in their bearing upon the Negro race. It is conceded that material tendencies are characteristic of the present age. Romance, sentiment, idealism in life and letters, struggle as they may, are swept aside by the vigorous commercialism that has taken possession of the nation at large. Meat has become more than life and raiment more than body. One question is being intensely pressed forward—how to learn a living? and the swing of the pendulum concerning the Negro’s education has swept a degree beyond any heretofore measured.

That manual training is needful no one will deny for a moment; that some of all races must inevitably be sons of toil is readily admitted; and that such education has its share in the development of every race there is no contention. We all know that Learning and Labor traveled hand in hand, with the emphasis upon the former, when the Anglo Saxon first wrestled with the wilderness of America. We know too that when the desert wastes were changed to smiling plains the ways of the two drifted apart, and learning took the path for culture and high scholarship, untrammeled, while labor plodded on, gaining slowly comparative ease in its varied lines. It is only when limitation is placed upon a race that objection comes—when one race is selected for more than a fair share of experimentation in the exploitation of a theory. Then danger seems imminent. In this case the danger lies in the tendency to lose sight of Negro scholarship—of Negro higher learning. There are other questions of equal importance to that of how to earn a living, and that college president who expressed it in these words “How to live on what one earns—how to live higher lives,” understood well their relative worth when pre-eminence was claimed for the latter, and pointed to a fact too largely ignored—that the lessons which teach these last mentioned come from a different training from that represented by industrial training alone....