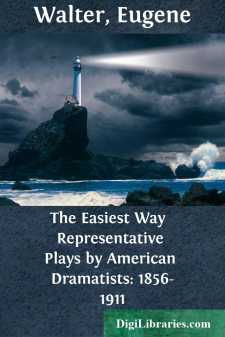 When questioned once regarding "The Easiest Way," Mr. Eugene Walter said, "Incidentally, I do not think much of it. To my mind a good play must have a tremendous uplift in thought and purpose. 'The Easiest Way' has none of this. There is not a character in the play really worth while, with the exception of the old agent. The rest, at best, are not a particular adornment to society, and the strength of the play lies in its true portrayal of the sordid type of life which it expressed. As it is more or less purely photographic, I do not think it should be given the credit of an inspiration—it is rather devilishly clever, but a great work it certainly is not."

Such was not the verdict of the first night audience, at the Stuyvesant Theatre, New York, January 19, 1909. It was found to be one of the most direct pieces of work the American stage had thus far produced—disagreeably realistic, but purging—and that is the test of an effective play—by the very poignancy of the tragic forces closing in around the heroine. Though it is not as literary a piece of dramatic expression as Pinero's "Iris," it is better in its effect; because its relentlessness is due, not so predominantly to the moral downgrade of the woman, as to the moral downgrade of a certain phase of life which engulfs those nearest the centre of it. The play roused a storm of comment; there were camps that took just the stand Mr. Walter takes in the opening quotation. But the play is included in this collection because its power, as a documentary report of a phase of American stage life, is undeniable; because, as a piece of workmanship, shorn of the usual devices called theatrical, it comes down to the raw bone of the theme, and firmly progresses to its great climax,—great in the sense of overpowering,—at the very fall of the final curtain.

Mr. Walter's various experiences in the theatre as an advance man, his star reporting on the Detroit News, his struggles to gain a footing in New York, contributed something to the bitter irony which runs as a dark pattern through the texture of "The Easiest Way." He is one of the many American dramatists who have come from the newspaper ranks, having served on the Cleveland Plain Dealer and Press, the New York Sun and Globe, the Cincinnati Post and the Seattle Star. Not many will disagree with the verdict that thus far he has not excelled this play, though "Paid in Full" (February 25, 1908) contains the same sting of modern life, which drives his characters to situations dramatic and dire, making them sell their souls and their peace of minds for the benefit of worldly ease and comfort. Note this theme in "Fine Feathers" (January 7, 1913) and "Nancy Lee" (April 9, 1918). In this sense, his plays all possess a consistency which makes no compromises. Arthur Ruhl, in his "Second Nights", refers to Walter as of the "no quarter" school. He brings a certain manly subtlety to bear on melodramatic subjects, as in "The Wolf" (April 18, 1908) and "The Knife" (April 12, 1917); he seems to do as he pleases with his treatment, as he did right at the start with his first successful play....