The Early History of the Airplane 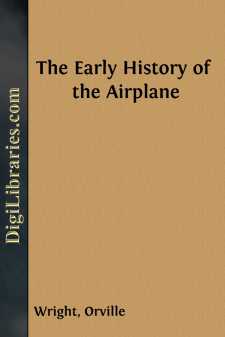 By Orville and Wilbur Wright

THOUGH the subject of aerial navigation is generally considered new, it has occupied the minds of men more or less from the earliest ages. Our personal interest in it dates from our childhood days. Late in the autumn of 1878 our father came into the house one evening with some object partly concealed in his hands, and before we could see what it was, he tossed it into the air. Instead of falling to the floor, as we expected, it flew across the room, till it struck the ceiling, where it fluttered awhile, and finally sank to the floor. It was a little toy, known to scientists as a “helicoptere,” but which we, with sublime disregard for science, at once dubbed a “bat.” It was a light frame of cork and bamboo, covered with paper, which formed two screws, driven in opposite directions by rubber bands under torsion. A toy so delicate lasted only a short time in the hands of small boys, but its memory was abiding.

Several years later we began building these helicopteres for ourselves, making each one larger than that preceding. But, to our astonishment, we found that the larger the “bat” the less it flew. We did not know that a machine having only twice the linear dimensions of another would require eight times the power. We finally became discouraged, and returned to kite-flying, a sport to which we had devoted so much attention that we were regarded as experts. But as we became older we had to give up this fascinating sport as unbecoming to boys of our ages.

It was not till the news of the sad death of Lilienthal reached America in the summer of 1896 that we again gave more than passing attention to the subject of flying. We then studied with great interest Chanute’s “Progress in Flying Machines,” Langley’s “Experiments in Aerodynamics,” the “Aeronautical Annuals” of 1905, 1906, and 1907, and several pamphlets published by the Smithsonian Institution, especially articles by Lilienthal and extracts from Mouillard’s “Empire of the Air.” The larger works gave us a good understanding of the nature of the flying problem, and the difficulties in past attempts to solve it, while Mouillard and Lilienthal, the great missionaries of the flying cause, infected us with their own unquenchable enthusiasm, and transformed idle curiosity into the active zeal of workers.

In the field of aviation there were two schools. The first, represented by such men as Professor Langley and Sir Hiram Maxim, gave chief attention to power flight; the second, represented by Lilienthal, Mouillard, and Chanute, to soaring flight. Our sympathies were with the latter school, partly from impatience at the wasteful extravagance of mounting delicate and costly machinery on wings which no one knew how to manage, and partly, no doubt, from the extraordinary charm and enthusiasm with which the apostles of soaring flight set forth the beauties of sailing through the air on fixed wings, deriving the motive power from the wind itself.

The balancing of a flyer may seem, at first thought, to be a very simple matter, yet almost every experimenter had found in this one point which he could not satisfactorily master. Many different methods were tried. Some experimenters placed the center of gravity far below the wings, in the belief that the weight would naturally seek to remain at the lowest point. It is true, that, like the pendulum, it tended to seek the lowest point; but also, like the pendulum, it tended to oscillate in a manner destructive of all stability. A more satisfactory system, especially for lateral balance, was that of arranging the wings in the shape of a broad V, to form a dihedral angle, with the center low and the wing-tips elevated. In theory this was an automatic system, but in practice it had two serious defects: first, it tended to keep the machine oscillating; and second, its usefulness was restricted to calm air.

In a slightly modified form the same system was applied to the fore-and-aft balance. The main aeroplane was set at a positive angle, and a horizontal tail at a negative angle, while the center of gravity was placed far forward. As in the case of lateral control, there was a tendency to constant undulation, and the very forces which caused a restoration of balance in calms caused a disturbance of the balance in winds. Notwithstanding the known limitations of this principle, it had been embodied in almost every prominent flying machine which had been built.

After considering the practical effect of the dihedral principle, we reached the conclusion that a flyer founded upon it might be of interest from a scientific point of view, but could be of no value in a practical way. We therefore resolved to try a fundamentally different principle. We would arrange the machine so that it would not tend to right itself. We would make it as inert as possible to the effects of change of direction or speed, and thus reduce the effects of wind-gusts to a minimum. We would do this in the fore-and-aft stability by giving the aeroplanes a peculiar shape; and in the lateral balance by arching the surfaces from tip to tip, just the reverse of what our predecessors had done. Then by some suitable contrivance, actuated by the operator, forces should be brought into play to regulate the balance.

Lilienthal and Chanute had guided and balanced their machines, by shifting the weight of the operator’s body. But this method seemed to us incapable of expansion to meet large conditions, because the weight to be moved and the distance of possible motion were limited, while the disturbing forces steadily increased, both with wing area and with wind velocity. In order to meet the needs of large machines, we wished to employ some system whereby the operator could vary at will the inclination of different parts of the wings, and thus obtain from the wind forces to restore the balance which the wind itself had disturbed. This could easily be done by using wings capable of being warped, and by supplementary adjustable surfaces in the shape of rudders. As the forces obtainable for control would necessarily increase in the same ratio as the disturbing forces, the method seemed capable of expansion to an almost unlimited extent....