The Earliest Arithmetics in English 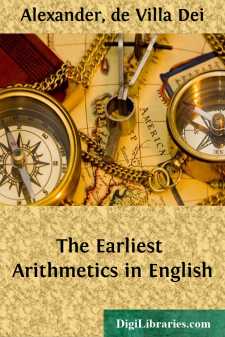 The number of English arithmetics before the sixteenth century is very small. This is hardly to be wondered at, as no one requiring to use even the simplest operations of the art up to the middle of the fifteenth century was likely to be ignorant of Latin, in which language there were several treatises in a considerable number of manuscripts, as shown by the quantity of them still in existence. Until modern commerce was fairly well established, few persons required more arithmetic than addition and subtraction, and even in the thirteenth century, scientific treatises addressed to advanced students contemplated the likelihood of their not being able to do simple division. On the other hand, the study of astronomy necessitated, from its earliest days as a science, considerable skill and accuracy in computation, not only in the calculation of astronomical tables but in their use, a knowledge of which latter was fairly common from the thirteenth to the sixteenth centuries.

The arithmetics in English known to me are:—

The Crafte of Nombrynge is one of a large number of scientific treatises, mostly in Latin, bound up together as Egerton MS. 2622 in the British Museum Library. It measures 7” × 5”, 29-30 lines to the page, in a rough hand. The English is N.E. Midland in dialect. It is a translation and amplification of one of the numerous glosses on the de algorismo of Alexander de Villa Dei (c. 1220), such as that of Thomas of Newmarket contained in the British Museum MS. Reg. 12, E. 1. A fragment of another translation of the same gloss was printed by Halliwell in his Rara Mathematica (1835) p. 29. It corresponds, as far as p. 71, l. 2, roughly to p. 3 of our version, and from thence to the end p. 2, ll. 16-40.

Both these tracts are here printed for the first time, but the first having been circulated in proof a number of years ago, in an endeavour to discover other manuscripts or parts of manuscripts of it, Dr....