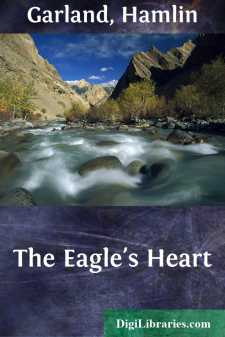 Harold was about ten years of age when his father, the Rev. Mr. Excell, took the pastorate of the First Church in Rock River. Many of the people in his first congregation remarked upon "the handsome lad." The clear brown of his face, his big yellow-brown eyes, his slender hands, and the grace of his movements gave him distinction quite aside from that arising from his connection with the minister.

Rev. John Excell was a personable man himself. He was tall and broad shouldered, with abundant brown hair and beard, and a winning smile. His eyes were dark and introspective, but they could glow like sunlit topaz, or grow dim with tears, as his congregation had opportunity to observe during this first sermon—but they were essentially sad eyes.

Mrs. Excell, a colorless little woman who retained only the dim outline of her girlhood's beauty, sat gracelessly in her pew, but her stepdaughter, Maud, by her side, was carrying to early maturity a dainty grace united with something strong and fine drawn from her father. She had his proud lift of the head.

"What a fine family!" whispered the women from pew to pew under cover of the creaking fans.

In the midst of the first sermon, a boy seated in front of Harold gave a shrill whoop of agony and glared back at the minister's son with distorted face, and only the prompt action on the part of both mothers prevented a clamorous encounter over the pew. Harold had stuck the head of a pin in the toe of his boot and jabbed his neighbor in the calf of the leg. It was an old trick, but it served well.

The minister did not interrupt his reading, but a deep flush of hot blood arose to his face, and the lids of his eyes dropped to shut out the searching gaze of his parishioners, as well as to close in a red glare of anger. From that moment Harold was known as "that preacher's boy," the intention being to convey by significant inflections and a meaning smile that he filled the usual description of a minister's graceless son.

Harold soon became renowned in his own world. He had no hard-fought battles, though he had scores of quarrels, for he scared his opponents by the suddenness and the intensity of his rage, which was fairly demoniacal in fury.

"You touch me and I'll kill you," he said in a low voice to the fat boy whose leg he had jabbed, and his bloodless face and blazing eyes caused the boy to leap frenziedly away. He carried a big knife, his playmates discovered, and no one, not even youths grown to man's stature, cared to attempt violence with him. One lad, struck with a stone from his cunning right hand, was carried home in a carriage. Another, being thrown by one convulsive effort, fell upon his arm, breaking it at the elbow. In less than a week every boy in Rock River knew something of Harry Excell's furious temper, and had learned that it was safer to be friend than enemy to him.

He had his partisans, too, for his was a singularly attractive nature when not enraged. He was a hearty, buoyant playmate, and a good scholar five days out of six, but he demanded a certain consideration at all times....