The Duke of Stockbridge 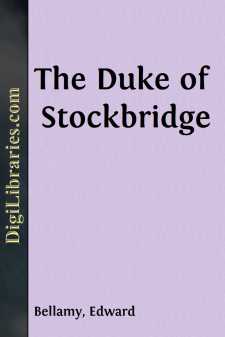 CHAPTER FIRST THE MARCH OF THE MINUTE MEN

The first beams of the sun of August 17, 1777, were glancing down the long valley, which opening to the East, lets in the early rays of morning, upon the village of Stockbridge. Then, as now, the Housatonic crept still and darkling around the beetling base of Fisher's Nest, and in the meadows laughed above its pebbly shoals, embracing the verdant fields with many a loving curve. Then, as now, the mountains cradled the valley in their eternal arms, all round, from the Hill of the Wolves, on the north, to the peaks that guard the Ice Glen, away to the far south-east. Then, as now, many a lake and pond gemmed the landscape, and many a brook hung like a burnished silver chain upon the verdant slopes. But save for this changeless frame of nature, there was very little, in the village, which the modern dweller in Stockbridge would recognize.

The main settlement is along a street lying east and west, across the plain which extends from the Housatonic, northerly some distance, to the foot of a hill. The village green or "smooth" lies rather at the western end of the village than at the center. At this point the main street intersects with the county road, leading north and south, and with divers other paths and lanes, leading in crooked, rambling lines to several points of the compass; sometimes ending at a single dwelling, sometimes at clusters of several buildings. On the hill, to the north, somewhat separated from the settlement on the plain, are quite a number of houses, erected there during the recent French and Indian wars, for the sake of being near the fort, which is now used as a parsonage by Reverend Stephen West, the young minister. The streets are all very wide and grassy, wholly without shade trees, and bordered generally by rail fences or stone walls. The houses, usually separated by wide intervals of meadow, are rarely over a story and a half in height. When painted, the color is usually red, brown, or yellow, the effect of which is a certain picturesqueness wholly outside any design on the part of the practical minded inhabitants.

Interspersed among the houses, and occurring more thickly in the south and west parts of the village, are curious huts, as much like wigwams as houses. These are the dwellings of the Christianized and civilized Stockbridge Indians, the original possessors of the soil, who live intermingled with the whites on terms of the most utter comity, fully sharing the offices of church and town, and fighting the battles of the Commonwealth side by side with the white militia.

Around the green stand the public buildings of the place. Here is the tavern, a low two-story building, without porch or piazza, and entered by a door in the middle of the longest side. Over the door swings a sign, on which a former likeness of King George has, by a metamorphosis common at this period, been transformed into a soldier of the revolution, in Continental uniform of buff and blue. But just at this time its contemplation does not afford the patriotic tipler as much complacency as formerly, for Burgoyne is thundering at the passes of the Hoosacs, only fifty miles away, and King George may get his red coat back again, after all....