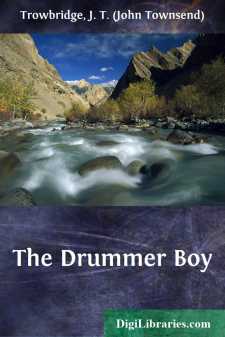 One evening, in the month of October, 1861, the Manly family were gathered together in their little sitting-room, discussing a question of the most serious importance to all of them, and to Frank in particular. Mrs. Manly sat by the table, pretending to sew; but now and then the tears rushed into her eyes, and dropped upon her work, in spite of all she could do to keep them back. Frank watched her with a swelling breast, sorry to see his mother so grieved, and yet glad in one little corner of his heart; for, although she had declared that she could not think of granting his request, he knew well, by those tears of hers, that she was already thinking of granting it.

"A pretty soldier you'll make, Frank!" said Helen, his elder sister, laughing at his ambition. "You never fired a gun in your life; and if you should see a rebel, you wouldn't know which end of the gun to point at him, you'd be so frightened."

"Yes, I know it," retorted Frank, stoutly, determined not to be dissuaded from his purpose either by entreaties or ridicule; "and for that reason I am going to enlist as a drummer boy."

"Well," exclaimed Helen, "your hands will tremble so, no doubt you can roll the drumsticks admirably."

"Yes, to be sure," replied Frank, with a meaning smile; for he thought within himself, "If she really thinks I am such a coward, never mind; she'll learn better some day."

"O, don't go to war, dear Frank," pleaded, in a low, sweet voice, his younger sister, little Hattie, the invalid, who lay upon the lounge, listening with painful interest to the conversation; "do, brother, stay at home with me."

That affectionate appeal touched the boy's heart more deeply than his mother's tears, his elder sister's ridicule, and his father's opposition, all combined. He knelt down by little Hattie's side, put his arms about her neck, and kissed her.

"But somebody must go and fight, little sister," he said, as soon as he could choke back his tears. "The rebels are trying to overthrow the government; and you wouldn't keep me at home—would you?—when it needs the services of every true patriot?"

"Which of the newspapers did you get that speech out of?" asked Helen. "If Jeff Davis could hear you, I think he'd give up the Confederacy at once. He would say, 'It's no use, since Young America has spoken.'"

"Yes; like the coon in the tree, when he saw Colonel Crockett taking aim at him," added Frank: "says the coon, 'Don't shoot! If it's you, colonel, I'll come down!' And I tell ye," cried the boy, enthusiastically, "there's something besides a joke in it. Jeff'll be glad to come down out of his tree, before we hang him on it."

"But if you go to war, Frank," exclaimed the little invalid, from her pillow, "you will be shot."

"O my son," said Mrs. Manly, regarding him with affectionate earnestness, "do you know what you say?...