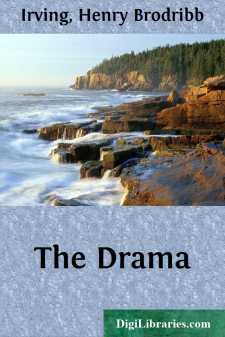 THE STAGE AS IT IS.

You will not be surprised that, on this interesting occasion, I have selected as the subject of the few remarks I propose to offer you, "The Stage as it is." The stage—because to my profession I owe it that I am here, and every dictate of taste and of fidelity impels me to honor it; the stage as it is—because it is very cheap and empty honor that is paid to the drama in the abstract, and withheld from the theatre as a working institution in our midst. Fortunately there is less of this than there used to be. It arose partly from intellectual superciliousness, partly from timidity as to moral contamination. To[10] boast of being able to appreciate Shakespeare more in reading him than in seeing him acted used to be a common method of affecting special intellectuality. I hope this delusion—a gross and pitiful one as to most of us—has almost absolutely died out. It certainly conferred a very cheap badge of superiority on those who entertained it. It seemed to each of them an inexpensive opportunity of worshipping himself on a pedestal. But what did it amount to? It was little more than a conceited and feather-headed assumption that an unprepared reader, whose mind is usually full of far other things, will see on the instant all that has been developed in hundreds of years by the members of a studious and enthusiastic profession. My own conviction is, that there are few characters or passages of our great dramatists which will not repay original study. But at least we must recognize[11] the vast advantages with which a practised actor, impregnated by the associations of his life, and by study—with all the practical and critical skill of his profession up to the date at which he appears, whether he adopts or rejects tradition—addresses himself to the interpretation of any great character, even if he have no originality whatever. There is something still more than this, however, in acting. Every one who has the smallest histrionic gift has a natural dramatic fertility; so that as soon as he knows the author's text, and obtains self-possession, and feels at home in a part without being too familiar with it, the mere automatic action of rehearsing and playing it at once begins to place the author in new lights, and to give the personage being played an individuality partly independent of, and yet consistent with, and rendering more powerfully visible, the dramatist's conception. It is [12]the vast power a good actor has in this way which has led the French to speak of creating a part when they mean its being first played; and French authors are so conscious of the extent and value of this co-operation of actors with them, that they have never objected to the phrase, but, on the contrary, are uniformly lavish in their homage to the artists who have created on the boards the parts which they themselves have created on paper.

I must add, as an additional reason for valuing the theatre, that while there is only one Shakespeare, and while there are comparatively few dramatists who are sufficiently classic to be read with close attention, there is a great deal of average dramatic work excellently suited for representation....