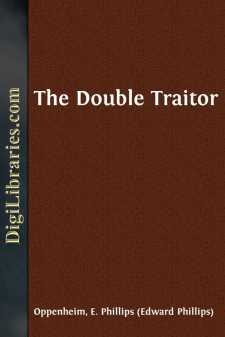 The woman leaned across the table towards her companion.

"My friend," she said, "when we first met—I am ashamed, considering that I dine alone with you to-night, to reflect how short a time ago—you spoke of your removal here from Paris very much as though it were a veritable exile. I told you then that there might be surprises in store for you. This restaurant, for instance! We both know our Paris, yet do we lack anything here which you find at the Ritz or Giro's?"

The young man looked around him appraisingly. The two were dining at one of the newest and most fashionable restaurants in Berlin. The room itself, although a little sombre by reason of its oak panelling, was relieved from absolute gloom by the lightness and elegance of its furniture and appointments, the profusion of flowers, and the soft grey carpet, so thickly piled that every sound was deadened. The delicate strains of music came from an invisible orchestra concealed behind a canopy of palms. The head-waiters had the correct clerical air, half complacent, half dignified. Among the other diners were many beautiful women in marvellous toilettes. A variety of uniforms, worn by the officers at different tables, gave colour and distinction to a tout ensemble with which even Norgate could find no fault.

"Germany has changed very much since I was here as a boy," he confessed. "One has heard of the growing wealth of Berlin, but I must say that I scarcely expected—"

He hesitated. His companion laughed softly at his embarrassment.

"Do not forget," she interrupted, "that I am Austrian—Austrian, that is to say, with much English in my blood. What you say about Germans does not greatly concern me."

"Of course," Norgate resumed, as he watched the champagne poured into his glass, "one is too much inclined to form one's conclusions about a nation from the types one meets travelling, and you know what the Germans have done for Monte Carlo and the Riviera—even, to a lesser extent, for Paris and Rome. Wherever they have been, for the last few years, they seem to have left the trail of the nouveaux riches. It is not only their clothes but their manners and bearing which affront."

The woman leaned her head for a moment against the tips of her slim and beautifully cared for fingers. She looked steadfastly across the table at her vis-Гѓ -vis.

"Now that you are here," she said softly, "you must forget those things. You are a diplomatist, and it is for you, is it not, outwardly, at any rate, to see only the good of the country in which your work lies."

Norgate flushed very slightly. His companion's words had savoured almost of a reproof.

"You are quite right," he admitted. "I have been here for a month, though, and you are the first person to whom I have spoken like this. And you yourself," he pointed out, "encouraged me, did you not, when you insisted upon your Austro-English nationality?"

"You must not take me too seriously," she begged, smiling. "I spoke foolishly, perhaps, but only for your good....