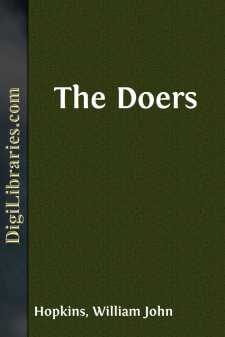 Once upon a time there was a little boy who was almost five years old. And his mother used to let him wander about the garden and in the road near the house, for there weren't many horses going by, and the men who drove the horses that did go by knew the little boy and they were careful.

So this boy wandered about and played happily by himself.

He had his cat and his cart and his shovel and his hoe, and he always wore his overalls. And wherever he went his cat went too.

One morning he saw some men come with a big cart and two horses, and they stopped in a field near his house where there were some queer boards nailed on sticks that were stuck in the ground; and the boards turned corners, and there were strings across from one board to another.

And the men got out of the big cart and unhitched the horses from the cart, and the little boy thought he had better go there and see what they were going to do.

So he went, dragging his cart behind him, with his shovel and his hoe rattling in the bottom of it.

And his cat saw him going, and she ran on ahead with her bushy tail sticking straight up in the air.

And the little boy came to the men and the horses and he stopped and stood still.

And his cat stopped too, but she didn't stand still; she rolled over on her back on the ground and wanted to play, but nobody would pay any attention to her.

Pretty soon one of the men looked down and saw the little boy.

"Hello," said the little boy. "What are you going to do?"

"Are you going to dig a hole?" the little boy asked.

"And what is the hole for?" the little boy asked. "Is it to plant something in?"

He pointed to a big iron scoop that was in the cart.

The little boy looked and nodded.

"The horses drag it, and a man takes hold of those two handles like plough-handles, and it scoops the dirt right up."

"You can watch us if you want to," the man said then. "But you must be careful not to get in the way of the horses."

"And can my kitty watch too?"

The man laughed and said his kitty could watch if she wanted to.

And the other men took pickaxes out of the cart, the handles of the pickaxes and their iron heads, and each man slipped the head of his pickaxe over the handle and gave it a tap on the ground to drive the head on.

And they walked slowly in under the strings between the boards and they got in a line.

And the little boy sat down on a stone that was just the right size and watched them. His cat came and got right between his feet.

Then the man at the end of the line raised his pickaxe high above his head, and the next man did the same, and then the third man, and so on to the other end of the line....