The Doctrine of Evolution Its Basis and Its Scope 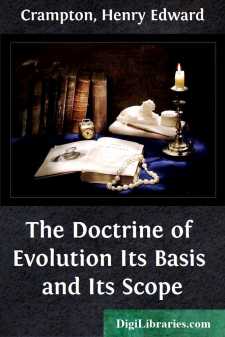 I EVOLUTION. THE LIVING ORGANISM AND ITS NATURAL HISTORY

The Doctrine of Evolution is a body of principles and facts concerning the present condition and past history of the living and lifeless things that make up the universe. It teaches that natural processes have gone on in the earlier ages of the world as they do to-day, and that natural forces have ordered the production of all things about which we know.

It is difficult to find the right words with which to begin the discussion of so vast a subject. As a general statement the doctrine is perhaps the simplest formula of natural science, although the facts and processes which it summarizes are the most complex that the human intellect can contemplate. Nothing in natural history seems to be surer than evolution, and yet the final solution of evolutionary problems defies the most subtle skill of the trained analyst of nature's order. No single human mind can contain all the facts of a single small department of natural science, nor can one mind comprehend fully the relations of all the various departments of knowledge, but nevertheless evolution seems to describe the history of all facts and their relations throughout the entire field of knowledge. Were it possible for a man to live a hundred years, he could only begin the exploration of the vast domains of science, and were his life prolonged indefinitely, his task would remain forever unaccomplished, for progress in any direction would bring him inevitably to newer and still unexplored regions of thought.

Therefore it would seem that we are attempting an impossible task when we undertake in the brief time before us the study of this universal principle and its fundamental concepts and applications. But are the difficulties insuperable? Truly our efforts would be foredoomed to failure were it not that the materials of knowledge are grouped in classes and departments which may be illustrated by a few representative data. And it is also true that every one has thought more or less widely and deeply about human nature, about the living world to which we belong, and about the circumstances that control our own lives and those of our fellow creatures. Many times we withdraw from the world of strenuous endeavor to think about the "meaning of things," and upon the "why" and "wherefore" of existence itself. Every one possesses already a fund of information that can be directly utilized during the coming discussions; for if evolution is true as a universal principle, then it is as natural and everyday a matter as nature and existence themselves, and its materials must include the facts of daily life and observation.

Although the doctrine of evolution was stated in very nearly its present form more than a century ago, much misunderstanding still exists as to its exact meaning and nature and value; and it is one of the primary objects of these discussions to do away with certain current errors of judgment about it. It is often supposed to be a remote and recondite subject, intelligible only to the technical expert in knowledge, and apart from the everyday world of life....