The Doctor : a Tale of the Rockies 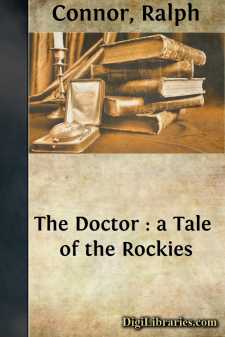 There were two ways by which one could get to the Old Stone Mill. One, from the sideroad by a lane which, edged with grassy, flower-decked banks, wound between snake fences, along which straggled irregular clumps of hazel and blue beech, dogwood and thorn bushes, and beyond which stretched on one side fields of grain just heading out this bright June morning, and on the other side a long strip of hay fields of mixed timothy and red clover, generous of colour and perfume, which ran along the snake fence till it came to a potato patch which, in turn, led to an orchard where the lane began to drop down to the Mill valley.

At the crest of the hill travellers with even the merest embryonic aesthetic taste were forced to pause. For there the valley with its sweet loveliness lay in full view before them. Far away to the right, out of an angle in the woods, ran the Mill Creek to fill the pond which brimmed gleaming to the green bank of the dam. Beyond the pond a sloping grassy sward showed green under an open beech and maple woods. On the hither side of the pond an orchard ran down hill to the water's edge, and at the nearer corner of the dam, among a clump of ancient willows, stood the Old Stone Mill, with house attached, and across the mill yard the shed and barn, all neat as a tidy housewife's kitchen. To the left of the mill, with its green turf-clad dam and placid gleaming pond, wandered off green fields of many shading colours, through which ran the Mill Creek, foaming as if enraged that it should have been even for a brief space paused in its flow to serve another's will. Then, beyond the many-shaded fields, woods again, spruce and tamarack, where the stream entered, and maple and beech on the higher levels. That was one way to the mill, the way the farmers took with their grist or their oats for old Charley Boyle to grind.

The other way came in by the McKenzies' lane from the Concession Line, which ran at right angles to the sideroad. This was a mere foot path, sometimes used by riders who came for a bag of flour or meal when the barrel or bin had unawares run low. This path led through the beech and maple woods to the farther end of the dam, where it divided, to the right if one wished to go to the mill yard, and across the dam if one wished to reach the house. From any point of view the Old Stone Mill, with its dam and pond, its surrounding woods and fields and orchard, made a picture of rare loveliness, and suggestive of deep fulness of peace. At least, the woman standing at the dam, where the shade of the willows fell, found it so. The beauty, the quiet of the scene, rested her; the full sweet harmony of those many voices in which Nature pours forth herself on a summer day, stole in upon her heart and comforted her. She was a woman of striking appearance. Tall and straight she stood, a figure full of strength; her dark face stamped with features that bespoke her Highland ancestry, her black hair shot with silver threads, parting in waves over her forehead; her eyes deep set, black and sombre, glowing with that mystic light that shines only in eyes that have for generations peered into the gloom of Highland glens....