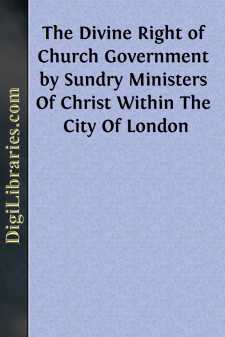 CHAPTER I. That there is a Government in the Church of DIVINE RIGHT now under the New Testament.

Jesus Christ our Mediator hath the government (both of the Church, and of all things for the Church) laid upon his shoulder, Isa. ix. 6, and to that end hath all power in heaven and earth given to him, Matth. xxviii. 18, John v. 22, Ephes. i. 22. But lapsed man (being full of pride, Psal. x. 2, 4, and enmity against the law of God, Rom. viii. 7) is most impatient of all government of God and of Christ, Ps. ii. 1, 2, 3, with Luke xix. 14, 27; whence it comes to pass, that the governing and kingly power of Christ hath been opposed in all ages, and especially in this of ours, by quarrelsome queries, wrangling disputes, plausible pretences, subtle policies, strong self-interests, and mere violent wilfulness of many in England, even after they are brought under the oath of God to reform church government according to the word of God. Yet it will be easily granted that there should be a government in the Church of God, otherwise the Church would become a mere Babel and chaos of confusion, and be in a far worse condition than all human societies in the whole world: and that some one church government is much to be preferred before another, yea, before all other; as being most desirable in itself, and most suitable to this state; otherwise, why is the Prelatical government rejected, that another and a better may be erected instead thereof? But the pinch lies in this, Whether there be any government in the Church visible of divine right? And, if so, which of those church governments (which lay claim to a divine right for their foundation) may be most clearly evinced by the Scriptures to be of divine right indeed? If the former be convincingly affirmed, the fancy of the Erastians and semi-Erastians of these things will vanish, that deny all government to the Church distinct from that of the civil magistrate. If the latter be solidly proved by Scripture, it will appear, whether the monarchical government of the pope and prelates; or the mere democratical government of all the people in an equal level of authority, as among the Brownists; or the mixed democratical government of both elders and people within their own single congregation only, without all subordination of Assemblies, and benefit of appeals, as among the Independents; or rather the pure representative government of the presbytery or church rulers only, chosen by the people, in subordination to superior synodical assemblies, and with appeals thereto, as it is among the Presbyterians, be that peculiar government which Jesus Christ hath left unto his church, by divine right, and in comparison of which all others are to be rejected.

To draw things therefore to a clear and speedy issue about the divine right of church government, let this general proposition be laid down—

The Scriptures declare, That there is a government of DIVINE RIGHT in the visible Church of Christ now under the New Testament.