The Delights of Wisdom Pertaining to Conjugial Love 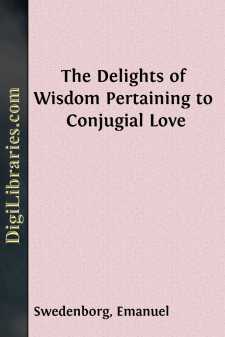 PRELIMINARY RELATIONS RESPECTING THE JOYS OF HEAVEN AND NUPTIALS THERE.

1. "I am aware that many who read the following pages and the Memorable Relations annexed to the chapters, will believe that they are fictions of the imagination; but I solemnly declare they are not fictions, but were truly done and seen; and that I saw them, not in any state of the mind asleep, but in a state of perfect wakefulness: for it has pleased the Lord to manifest himself to me, and to send me to teach the things relating to the New Church, which is meant by the New Jerusalem in the Revelation: for which purpose he has opened the interiors of my mind and spirit; by virtue of which privilege it has been granted me to be in the spiritual world with angels, and at the same time in the natural world with men, and this now (1768) for twenty-five years."

2. On a certain time there appeared to me an angel flying beneath the eastern heaven, with a trumpet in his hand, which he held to his mouth, and sounded towards the north, the west, and the south. He was clothed in a robe, which waved behind him as he flew along, and was girt about the waist with a band that shone like fire and glittered with carbuncles, and sapphires: he flew with his face downwards, and alighted gently on the ground, near where I was standing. As soon as he touched the ground with his feet, he stood erect, and walked to and fro: and on seeing me he directed his steps towards me. I was in the spirit, and was standing in that state on a little eminence in the southern quarter of the spiritual world. When he came near, I addressed him and asked him his errand, telling him that I had heard the sound of his trumpet, and had observed his descent through the air. He replied, "My commission is to call together such of the inhabitants of this part of the spiritual world, as have come hither from the various kingdoms of Christendom, and have been most distinguished for their learning, their ingenuity, and their wisdom, to assemble on this little eminence where you are now standing, and to declare their real sentiments, as to what they had thought, understood, and inwardly perceived, while in the natural world, respecting Heavenly Joy and Eternal Happiness. The occasion of my commission is this: several who have lately come from the natural world, and have been admitted into our heavenly society, which is in the east, have informed us, that there is not a single person throughout the whole Christian world that is acquainted with the true nature of heavenly joy and eternal happiness; consequently that not a single person is acquainted with the nature of heaven. This information greatly surprised my brethren and companions; and they said to me, 'Go down, call together and assemble those who are most eminent for wisdom in the world of spirits, (where all men are first collected after their departure out of the natural world,) so that we may know of a certainty, from the testimony of many, whether it be true that such thick darkness, or dense ignorance, respecting a future life, prevails among Christians.'" The angel then said to me, "Wait awhile, and you will see several companies of the wise ones flocking together to this place, and the Lord will prepare them a house of assembly." I waited, and lo!...