The Defects of the Negro Church The American Negro Academy. Occasional Papers No. 10 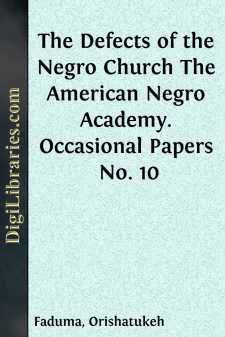 The Defects of the Negro Church.

The writer does not undertake to point out all the defects of the Negro church. He does not lay any claim to omniscience.

The limits of time and the scope of the subject prevent him from discussing even what he knows in part. It is only some of the leading defects in the Negro Church which will be presented for discussion. It may be necessary to state at the onset that the writer is an optimist in his studies of questions relating to his race. If at any time he is compelled to use the surgeon’s knife he will do so with the utmost sympathy and with a view to heal. It may also be necessary to state, in order to allay the fears of our friends and prevent the reckless criticism of our detractors, that the defects of the Negro church are found more or less in churches of other races. They are the same in kind but differ in degree, on account of difference in environment. They are not inherent in the race, but are found wherever the environments call for them. It may be laid down as an axiomatic truth that there has never been and there is not a perfect church. Of the twelve men who formed the nucleus of the Christian church and who had the advantage of the personal teaching of the Christ, one was a doubter, another was worldly-minded, a betrayer, and a son of perdition who sought relief from the stings of conscience by self-destruction; a third was a deserter and vacillator, who drew from the great apostle of the Gentiles a stinging rebuke for stultifying his conscience during that exciting controversy which was to settle once for all whether Christianity was to be a racial or a universal religion. But because there never was a perfect church is no reason why we should speak lightly or condone the defects of the Negro Church. Our ideal of the Negro Church is one which will have as few defects as possible. If we expose these defects it is because our aim is to correct them so as to reach as near as possible our ideal. We hope we shall not be misunderstood if we submit for investigation the following defects in the Negro Church.

I. THE TENDENCY TO LAY STRESS ON OUTWARDNESS RATHER THAN INWARDNESS.

All life is known by its manifestations. The latter is the outcome, the effect of the former. The manifestations of life cannot by any means be more important than the life which makes them possible. Christianity is a religion of inwardness, it finds its root in the heart and soul of man, then effects the outward life. Whenever the inner or spiritual life is renewed, there follows from necessity a renewed exterior. There must be first life in the soul. Nor can there be any evolution of the soul or of society without a previous involution in them. The whole nature of man must be wrapped up in the image of God before any fruits of Godliness show themselves. The tendency in the Negro Church is to look for these manifestations rather than to work for the indwelling spirit who is the cause of such manifestations. Parallel with this tendency in the church, is the effort which is being made after expression of religious life when it should be directed along the line of impressing it....