The Debtor A Novel 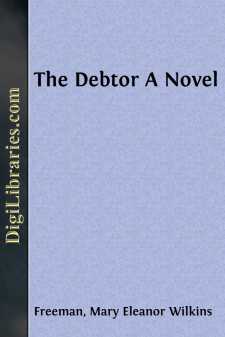 Banbridge lies near enough to the great City to perceive after nightfall, along the southern horizon, the amalgamated glow of its multitudinous eyes of electric fire. In the daytime the smoke of its mighty breathing, in its race of progress and civilization, darkens the southern sky. The trains of great railroad systems speed between Banbridge and the City. Half the male population of Banbridge and a goodly proportion of the female have for years wrestled for their daily bread in the City, which the little village has long echoed, more or less feebly, though still quite accurately, with its own particular little suburban note.

Banbridge had its own “season,” beginning shortly after Thanksgiving, and warming gradually until about two weeks before Lent, when it reached its high-water mark. All winter long there were luncheons and teas and dances. There was a whist club, and a flourishing woman's club, of course. It was the women who were thrown with the most entirety upon the provincial resources. But they were a resolved set, and they kept up the gait of progress of their sex with a good deal of success. They improved their minds and their bodies, having even a physical-culture club and a teacher coming weekly from the City. That there were links and a golf club goes without saying.

It was spring, and golf had recommenced for some little time. Mrs. Henry Lee and Mrs. William Van Dorn passed the links that afternoon.

The two ladies were being driven about Banbridge by Samson Rawdy, the best liveryman in Banbridge, in his best coach, with his two best horses. The horses, indeed, two fat bays, were considered as rather sacred to fashionable calls, as was the coach, quite a resplendent affair, with very few worn places in the cloth lining.

Banbridge ladies never walked to make fashionable calls. They had a coach even for calls within a radius of a quarter of a mile, where they could easily have walked, and did walk on any other occasion. It would have shocked the whole village if a Banbridge woman had gone out in her best array, with her card-case, making calls on foot. Therefore, in this respect the ladies who were better off in this world's goods often displayed a friendly regard for those who could ill afford the necessary expense of state calls. Often one would invite another to call with her, defraying all the expenses of the trip, and Mrs. Van Dorn had so invited Mrs. Lee to-day. Mrs. Lee, who was a small, elderly woman, was full of deprecating gratitude and a sense of obligation which made it appear incumbent upon her not to differ with her companion in any opinion which she might advance, and, as a rule, to give her the initiative in conversation during their calls, and the precedence in entry and retreat.

Mrs. Van Dorn was as small as her companion, but with a confidence of manner which seemed to push her forward in the field of vision farther than her size warranted.

She was also highly corseted, and much trimmed over her shoulders, which gave an effect of superior size and weight; her face, too, was very full and rosy, while the other's was narrow and pinched at the chin and delicately transparent....