The Damsel and the Sage A Woman's Whimsies 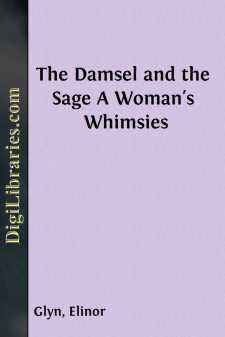 THE DAMSEL AND THE SAGE

nd the Damsel said to the Sage:

"Now, what is life? And why does the fruit taste bitter in the mouth?"

And the Sage answered, as he stepped from his cave:

"My child, there was once a man who had two ears like other people. They were naturally necessary for his enjoyment of the day. But one of these ears offended his head. It behaved with stupidity, thinking thereby to enhance its value to him—it heard too much. Oh, it conducted itself with a gross stupidity. 'Out upon you,' cried the man; 'since you have overstepped the limit of the functions of an ear, I shall cut you from my head!' And so, without hesitation, he took a sword and accomplished the deed. The poor ear then lay upon the ground bleeding, and the man went about with a mutilated head."

"And what was the good of all that?" said the Damsel.

"There was no good in it," replied the Sage. "But he was a man, and he had punished the too-fond-and-foolish ear—also he hoped a new and more suitable one would grow in its place. 'Change,' he said, 'was a thing to be welcomed.'"

"And tell me, Sage, what became of the ear?" asked the Damsel.

"The ear fared better. Another man of greater shrewdness came along, and, although he had two ears of his own, he said, 'A third will not come amiss,' and he picked up the ear and heard with three ears instead of two. So he became knowing and clever because of the information he acquired in this way. The grafted ear grew and flourished, and, in spite of its remaining abnormal, it obtained a certain enjoyment out of existence."

"But who really benefited by all this?" inquired the Damsel.

"No one," said the Sage; "the first man went about with only one ear; the second man made himself remarkable with three—and the cut-off ear, although alive and successful, felt itself an excrescence."

"Then what could be the pleasure of it all?" demanded the Damsel.

"Out upon you!" exclaimed the Sage, in a passion. "You asked me what was life—and why the fruit tasted bitter in the mouth? I have answered you."

And he went back into his cave and barred the door.

The Damsel sat down upon a stone outside.

"It seems to me that men are fools," she said, and she clapped her hands to her two ears. "When I am angry and offended with one of you, I will cut the ear from off the head of some one else."

And she picked up an apple and ate it. And it tasted sweet.

A man will often fling away a woman who has wronged him although in doing so he is deeply hurting himself. A woman will forgive a man who has wronged her because her own personal pleasure in him is greater than her outraged pride. Hence women are more unconscious philosophers than men.

The Damsel returned again to the cave of the Sage. There were other questions she wished to ask about life. The door was hard to push ajar, but at last she obtained entrance.

"What do you want now?" he demanded, with a voice of grumbling. "Were you not content with my last utterances?"

"Yes—and no," said the Damsel. "I came to quite other conclusions myself....