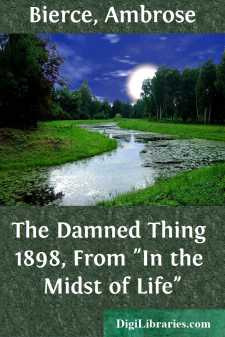 By THE light of a tallow candle, which had been placed on one end of a rough table, a man was reading something written in a book. It was an old account book, greatly worn; and the writing was not, apparently, very legible, for the man sometimes held the page close to the flame of the candle to get a stronger light upon it. The shadow of the book would then throw into obscurity a half of the room, darkening a number of faces and figures; for besides the reader, eight other men were present. Seven of them sat against the rough log walls, silent and motionless, and, the room being small, not very far from the table. By extending an arm any one of them could have touched the eighth man, who lay on the table, face upward, partly covered by a sheet, his arms at his sides. He was dead.

The man with the book was not reading aloud, and no one spoke; all seemed to be waiting for something to occur; the dead man only was without expectation. From the blank darkness outside came in, through the aperture that served for a window, all the ever unfamiliar noises of night in the wilderness—the long, nameless note of a distant coyote; the stilly pulsing thrill of tireless insects in trees; strange cries of night birds, so different from those of the birds of day; the drone of great blundering beetles, and all that mysterious chorus of small sounds that seem always to have been but half heard when they have suddenly ceased, as if conscious of an indiscretion. But nothing of all this was noted in that company; its members were not overmuch addicted to idle interest in matters of no practical importance; that was obvious in every line of their rugged faces—obvious even in the dim light of the single candle. They were evidently men of the vicinity—farmers and woodmen.

The person reading was a trifle different; one would have said of him that he was of the world, worldly, albeit there was that in his attire which attested a certain fellowship with the organisms of his environment. His coat would hardly have passed muster in San Francisco: his footgear was not of urban origin, and the hat that lay by him on the floor (he was the only one uncovered) was such that if one had considered it as an article of mere personal adornment he would have missed its meaning. In countenance the man was rather prepossessing, with just a hint of sternness; though that he may have assumed or cultivated, as appropriate to one in authority. For he was a coroner. It was by virtue of his office that he had possession of the book in which he was reading; it had been found among the dead man's effects—in his cabin, where the inquest was now taking place.

When the coroner had finished reading he put the book into his breast pocket. At that moment the door was pushed open and a young man entered. He, clearly, was not of mountain birth and breeding: he was clad as those who dwell in cities. His clothing was dusty, however, as from travel. He had, in fact, been riding hard to attend the inquest.

The coroner nodded; no one else greeted him.

"We have waited for you," said the coroner. "It is necessary to have done with this business to-night."

The young man smiled. "I am sorry to have kept you," he said. "I went away, not to evade your summons, but to post to my newspaper an account of what I suppose I am called back to relate."

"The account that you posted to your newspaper," he said, "differs probably from that which you will give here under oath."

"That," replied the other, rather hotly and with a visible flush, "is as you choose. I used manifold paper and have a copy of what I sent. It was not written as news, for it is incredible, but as fiction. It may go as a part of my testimony under oath."

"But you say it is incredible."

"That is nothing to you, sir, if I also swear that it is true."

The coroner was apparently not greatly affected by the young man's manifest resentment....