by Sutton and Sons 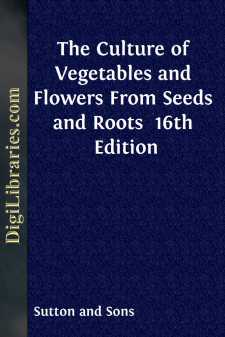 THE CULTURE OF VEGETABLES

Horticulture has a full share in the progressive character of the age. Changes have been effected in the Kitchen Garden which are quite as remarkable as the altered methods of locomotion, lighting and sanitation. Vegetables are grown in greater variety, of higher quality, and are sent to table both earlier and later in the season than was considered possible by gardeners of former generations.

When Parkinson directed his readers to prepare Melons for eating by mixing with the pulp 'salt and pepper and good store of wine,' he must have been familiar with fruit differing widely from the superb varieties which are now in favour. A kindred plant, the Cucumber, is more prolific than ever, and the fruits win admiration for their symmetrical form.

The Tomato has ceased to be a summer luxury for the few, and is now prized as a delicacy throughout the year by all classes of the community.

As a result of the hybridiser's skill modern Potatoes produce heavier crops, less liable to succumb to the attacks of disease, than the old varieties, and the finest table quality has been maintained.

Peas are not what they were because they are so immensely better. While the powers of the plant have been concentrated, with the result that it occupies less room and occasions less trouble, its productiveness has been augmented and the quality improved. All the pulse tribe have shared in the advance, and a comparison of any dozen or score of the favourite sorts of Peas or Beans grown to-day with the same number of favourites of half or even a quarter of a century since will at once prove that progress in horticulture is no dream of the enthusiast.

Among the Brassicas, such as Broccoli, Brussels Sprouts, Cabbage and Cauliflower, a series of remarkable examples might be mentioned; and roots such as Beet, Carrot, Onion, Radish and Turnip afford other striking instances of improvement. Salads also, including Celery, Chicory, Endive and Lettuce, have participated in the beneficial change and offer a large choice of dainties, adapted to various periods of the year. Indeed it may be truly said that none of the occupants of the vegetable garden have refused to be improved by scientific crossing and selection.

The vegetables which are available for daily use offer a wide and most interesting field to the expert in selecting and hybridising. For past achievements we are indebted to the untiring labours of specialists, and to their continued efforts we look for further results. Whether the future may have in store greater changes than have already been witnessed none can tell. One thing only is certain, that finality is unattainable, and the knowledge of this fact adds to the charm of a fascinating pursuit. Happily, innovations are no longer received with the suspicion or hostility they formerly encountered. In gardens conducted with a spirit of enterprise novelties are welcome and have an impartial trial. The prudent gardener will regard these sowings as purely experimental, made for the express purpose of ascertaining whether better crops can be secured in future years. For his principal supplies he will rely on those varieties which experience has proved to be suitable for the soil and adapted to the requirements of the household he has to serve. By growing the best of everything, and growing everything well, not only is the finest produce insured in abundance, but every year the garden presents new features of interest.

In considering the general order of work in the Kitchen Garden, the first principle is that its productive powers shall be taxed to the utmost. There need be no fallowing—no resting of the ground; and if it should so happen that by hard cropping perplexity arises about the disposal of produce, the proverbial three courses are open—to sell, to give, or to dig the stuff in as manure. The last-named course will pay well, especially in the disposal of the remains of Cabbage, Kale, Turnips, and other vegetables that have stood through the winter and occupy ground required for spring seeds. Bury them in trenches, and sow Peas, Beans, &c., over them, and in due time full value will be obtained for the buried crops and the labour bestowed upon them. But hard cropping implies abundant manuring and incessant stirring of the soil. To take much off and put little on is like burning the candle at both ends, or expecting the whip to be an efficient substitute for corn when the horse has extra work to do. Dig deep always: if the soil be shallow it is advisable to turn the top spit in the usual manner, and break up the subsoil thoroughly for another twelve or fifteen inches....