The Cruise of the Frolic 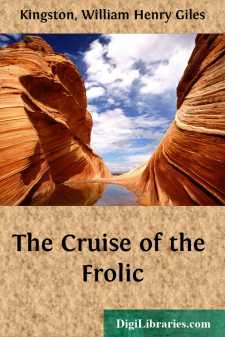 The “Cruise of the ‘Frolic’” has already met with so many marks of favour, that it is hoped it will be welcomed not the less warmly in its new and more attractive form. The yachting world especially received the narrative of my adventures in good part; two or three, however, among whom was the O’Wiggins, insisted that I had caricatured them, and talked of demanding satisfaction at the point of the sword, or the muzzle of a pistol. I assured them then, as I do now, that on the word of an officer and a gentleman, I had not the slightest intention of wounding the feelings of any human being; and I entreated their pardon, if in shooting at a venture I had hit an object at which I had not taken aim.

I can only say, that I hope my readers may experience as much pleasure in perusing my adventures, as I had in writing them, and, I may add, again feel, in looking over the pages which recall so many of the amusing scenes and incidents of my yachting days—a pleasure which will, I feel sure, be shared by my companions in the adventures I have described.

No one with any yachting experience will venture to say that the tale is improbable, although it may be confessed that when an author takes pen in hand, he is apt to throw an air of romance over events which, if told in a matter-of-fact manner, would be received as veracious history; and such is the plea which I have to offer for the truth of the following narrative of my yachting experience many summers ago.

What yachtsman can ever forget the beautiful scene Cowes Road presented on a regatta morning in the palmy days of the club, when the broad pennant of its noble commodore flew at the masthead of his gallant little ship, the “Falcon,” and numberless beautiful craft, of all rigs and sizes, with the white ensign of St. George at their peaks, and the red cross and crown in their snowy burgees aloft, willingly followed the orders of their honoured leader? Then, from far and near, assembled yachts and pleasure-boats, of all degrees, loaded with eager passengers to witness the regatta; and no puffing, blowing, smoking, rattling steamers came to create discord on the ocean, and to interfere with the time-honoured monopoly of the wind in propelling vessels across the watery plain. Small thanks to the man whose impertinently-inquisitive brain could not let the lid of his tea-kettle move up and down at its pleasure without wanting to know the cause of the phenomenon! Smaller to him who insisted on boiling salt water on the realms of Old Neptune! Stern enemy to the romance and poetry of a life on the ocean! Could you not be content to make carriages go along at the rate of forty miles an hour over the hard land, without sending your noisy, impudent demagogues of machines to plough up the waves of the sea, which have already quite enough to do when their lawful agitator thinks fit to exert his influence? It was a work of no slight difficulty and risk to cruise in and out among the innumerable craft at anchor, and dodging about under sail just when the yachts were preparing to start....