The Critique of Practical Reason 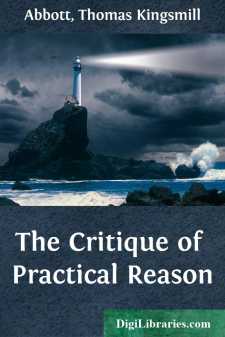 This work is called the Critique of Practical Reason, not of the pure practical reason, although its parallelism with the speculative critique would seem to require the latter term. The reason of this appears sufficiently from the treatise itself. Its business is to show that there is pure practical reason, and for this purpose it criticizes the entire practical faculty of reason. If it succeeds in this, it has no need to criticize the pure faculty itself in order to see whether reason in making such a claim does not presumptuously overstep itself (as is the case with the speculative reason). For if, as pure reason, it is actually practical, it proves its own reality and that of its concepts by fact, and all disputation against the possibility of its being real is futile.

With this faculty, transcendental freedom is also established; freedom, namely, in that absolute sense in which speculative reason required it in its use of the concept of causality in order to escape the antinomy into which it inevitably falls, when in the chain of cause and effect it tries to think the unconditioned. Speculative reason could only exhibit this concept (of freedom) problematically as not impossible to thought, without assuring it any objective reality, and merely lest the supposed impossibility of what it must at least allow to be thinkable should endanger its very being and plunge it into an abyss of scepticism.

Inasmuch as the reality of the concept of freedom is proved by an apodeictic law of practical reason, it is the keystone of the whole system of pure reason, even the speculative, and all other concepts (those of God and immortality) which, as being mere ideas, remain in it unsupported, now attach themselves to this concept, and by it obtain consistence and objective reality; that is to say, their possibility is proved by the fact that freedom actually exists, for this idea is revealed by the moral law.

Freedom, however, is the only one of all the ideas of the speculative reason of which we know the possibility a priori (without, however, understanding it), because it is the condition of the moral law which we know. * The ideas of God and immortality, however, are not conditions of the moral law, but only conditions of the necessary object of a will determined by this law; that is to say, conditions of the practical use of our pure reason. Hence, with respect to these ideas, we cannot affirm that we know and understand, I will not say the actuality, but even the possibility of them. However they are the conditions of the application of the morally determined will to its object, which is given to it a priori, viz., the summum bonum. Consequently in this practical point of view their possibility must be assumed, although we cannot theoretically know and understand it. To justify this assumption it is sufficient, in a practical point of view, that they contain no intrinsic impossibility (contradiction). Here we have what, as far as speculative reason is concerned, is a merely subjective principle of assent, which, however, is objectively valid for a reason equally pure but practical, and this principle, by means of the concept of freedom, assures objective reality and authority to the ideas of God and immortality....