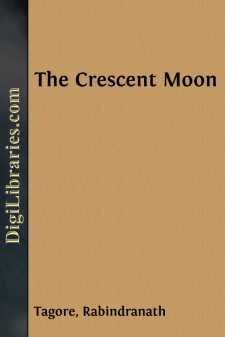 INDEX OF THE FIRST LINES

Ah, these jasminesAh, who was it coloured that little frockBless this little heartChild, how happy you are sitting in the dustCome and hire meDay by day I float my paper boatsI am small because I am a little childIf baby only wanted to, he could flyIf I were only a little puppyIf people came to know where my king's palace isI long to go over thereImagine, motherI only said, "When in the evening"I paced aloneIt is time for me to go, motherI want to give you something, my childI wish I could take a quiet cornerMother, I do want to leave off my lessonsMother, let us imagine we are travellingMother, the folk who live up in the cloudsMother, the light has grown greyMother, your baby is sillyOn the seashore of endless worldsO you shaggy-headed banyan treeSay of him what you pleaseSullen clouds are gatheringSupposing I became a <i>champa</i> flowerThe boat of the boatman MadhuThe night was dark when we went awayThe sleep that flits on baby's eyesThey clamour and fightThis song of mineWhen I bring you coloured toysWhen storm cloudsWhen the gong sounds tenWhere have I come fromWho stole sleep from baby's eyesWhy are those tears in your eyes, my childWhy do you sit there on the floorYou say that father writes a lot of books

I paced alone on the road across the field while the sunset was hiding its last gold like a miser.

The daylight sank deeper and deeper into the darkness, and the widowed land, whose harvest had been reaped, lay silent.

Suddenly a boy's shrill voice rose into the sky. He traversed the dark unseen, leaving the track of his song across the hush of the evening.

His village home lay there at the end of the waste land, beyond the sugar-cane field, hidden among the shadows of the banana and the slender areca palm, the cocoa-nut and the dark green jack-fruit trees.

I stopped for a moment in my lonely way under the starlight, and saw spread before me the darkened earth surrounding with her arms countless homes furnished with cradles and beds, mothers' hearts and evening lamps, and young lives glad with a gladness that knows nothing of its value for the world.

On the seashore of endless worlds children meet.

The infinite sky is motionless overhead and the restless water is boisterous. On the seashore of endless worlds the children meet with shouts and dances.

They build their houses with sand, and they play with empty shells. With withered leaves they weave their boats and smilingly float them on the vast deep. Children have their play on the seashore of worlds.

The sea surges up with laughter, and pale gleams the smile of the sea-beach. Death-dealing waves sing meaningless ballads to the children, even like a mother while rocking her baby's cradle....