The Courting Of Lady Jane 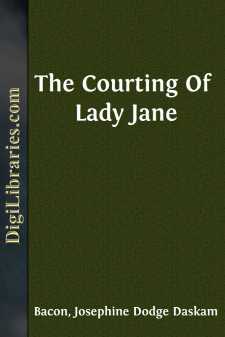 The colonel entered his sister's room abruptly, sat down on her bed, and scattered a drawerful of fluffy things laid out for packing.

"You don't seem to think about my side of the matter," he said gloomily. "What am I to do here all alone, for Heaven's sake?"

"That is so like a man," she murmured, one arm in a trunk. "Let me see: party-boots, the children's arctics, Dick's sweater—did you think I could live here forever, Cal?"

"Then you shouldn't have come at all. Just as I get thoroughly settled down to flowers in the drawing-room, and rabbits in a chafing-dish, and people for dinner, you skip off. Why don't you bring the children here? What did you marry into the navy for, anyway? Nagasaki! I wouldn't live in a place called Nagasaki for all that money could buy!"

"You're cross," said Mrs. Dick placidly. "Please get off that bath-wrapper. If you don't like to live alone—Six bath-towels, Dick's shoe-bag, my old muff (I hope and pray I'll remember that!) Helen's reefer—Why don't you marry?"

"Marry? Marry! Are you out of your mind, Dosia? I marry!"

The colonel twisted his grayish mustache into points; a look of horror spread over his countenance.

"Men have done it," she replied seriously, "and lived. Look at Dick."

"Look at him? But how? Who ever sees him? I've ceased to believe in him, personally. I can't look across the Pacific. Consider my age, Dosia; consider my pepper-and-salt hair; consider my bronchitis; consider—"

"Consider your stupidity! As to your hair, I should hate to eat a salad dressed with that proportion of pepper. As to your age, remember you're only ten years ahead of me, and I expect to remain thirty-eight for some time."

"But forty-eight is centenarian to a girl of twenty-two, Dosia."

The colonel was plaiting and un-plaiting the ball-fringe of the bed-slip; his eyes followed the motion of his fingers—he did not see his sister's triumphant smile as she dived again into the trunk.

"That depends entirely on the girl. Take Louise Morris, for instance; she regards you as partly entombed, probably"—the colonel winced involuntarily—"but, on the other hand, a girl like Jane Leroy would have no such nonsense in her head, and she can't be much more than twenty."

"She is twenty-two," cried the unsuspecting colonel eagerly.

"Ah? I should not have said so much. Now such a girl as that, Cal, handsome, dignified, college-bred, is just the wife for an older man. One can't seem to see her marrying some young snip of her own age. She'd be wasted on him. I happen to know that she refused Wilbur Vail entirely on that ground. She admitted that he was a charming fellow, but she told her mother he was far too young for her. And he was twenty-eight."

"Did she?" The colonel left the fringe. "But—but perhaps there were other reasons; perhaps she didn't—"

"Oh, probably she didn't. But still, she said he was too young. That's the way with these serious girls. Now I thought Dick was middle-aged when I married him, and he was thirty. Jane doesn't take after her mother; she was only nineteen when she was born—I mean, of course, when Jane was born. Will you hand me that crocheted shawl, please?"

"My dear girl, you're not going to try to get that into that trunk, too?...