The Country of the Blind, and Other Stories 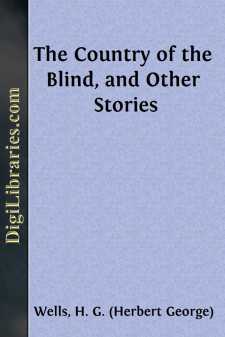 I. THE JILTING OF JANE.

As I sit writing in my study, I can hear our Jane bumping her way downstairs with a brush and dust-pan. She used in the old days to sing hymn tunes, or the British national song for the time being, to these instruments, but latterly she has been silent and even careful over her work. Time was when I prayed with fervour for such silence, and my wife with sighs for such care, but now they have come we are not so glad as we might have anticipated we should be. Indeed, I would rejoice secretly, though it may be unmanly weakness to admit it, even to hear Jane sing "Daisy," or, by the fracture of any plate but one of Euphemia's best green ones, to learn that the period of brooding has come to an end.

Yet how we longed to hear the last of Jane's young man before we heard the last of him! Jane was always very free with her conversation to my wife, and discoursed admirably in the kitchen on a variety of topics—so well, indeed, that I sometimes left my study door open—our house is a small one—to partake of it. But after William came, it was always William, nothing but William; William this and William that; and when we thought William was worked out and exhausted altogether, then William all over again. The engagement lasted altogether three years; yet how she got introduced to William, and so became thus saturated with him, was always a secret. For my part, I believe it was at the street corner where the Rev. Barnabas Baux used to hold an open-air service after evensong on Sundays. Young Cupids were wont to flit like moths round the paraffin flare of that centre of High Church hymn-singing. I fancy she stood singing hymns there, out of memory and her imagination, instead of coming home to get supper, and William came up beside her and said, "Hello!" "Hello yourself!" she said; and etiquette being satisfied, they proceeded to talk together.

As Euphemia has a reprehensible way of letting her servants talk to her, she soon heard of him. "He is such a respectable young man, ma'am," said Jane, "you don't know." Ignoring the slur cast on her acquaintance, my wife inquired further about this William.

"He is second porter at Maynard's, the draper's," said Jane, "and gets eighteen shillings—nearly a pound—a week, m'm; and when the head porter leaves he will be head porter. His relatives are quite superior people, m'm. Not labouring people at all. His father was a greengrosher, m'm, and had a churnor, and he was bankrup' twice. And one of his sisters is in a Home for the Dying. It will be a very good match for me, m'm," said Jane, "me being an orphan girl."

"Then you are engaged to him?" asked my wife.

"Not engaged, ma'am; but he is saving money to buy a ring—hammyfist."

"Well, Jane, when you are properly engaged to him you may ask him round here on Sunday afternoons, and have tea with him in the kitchen;" for my Euphemia has a motherly conception of her duty towards her maid-servants. And presently the amethystine ring was being worn about the house, even with ostentation, and Jane developed a new way of bringing in the joint so that this gage was evident....