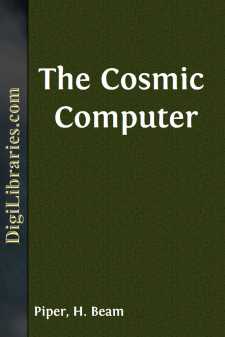 Conn Maxwell, at the armor-glass front of the observation deck, watched the landscape rush out of the horizon and vanish beneath the ship, ten thousand feet down. He thought he knew how an hourglass must feel with the sand slowly draining out.

The words echoed in his mind as though he had spoken them aloud, and then, realizing that he never addressed himself as sir, he turned. It was the first mate.

He had a clipboard in his hand, and he was wearing a Terran Federation Space Navy uniform of forty years, or about a dozen regulation-changes, ago. Once Conn had taken that sort of thing for granted. Now it was obtruding upon him everywhere.

"Thirty minutes to Litchfield, sir," the first officer repeated, and gave him the clipboard to check the luggage list. Valises, two; trunks, two; microbook case, one. The last item fanned a small flicker of anger, not at any person, not even at himself, but at the whole infernal situation. He nodded.

"That's everything. Not many passengers left aboard, are there?"

"You're the only one, first class, sir. About forty farm laborers on the lower deck." He dismissed them as mere cargo. "Litchfield's the end of the run."

The mate looked again at his name on the list and grinned.

"Sure; you're Rodney Maxwell's son. Your father's been giving us a lot of freight lately. I guess I don't have to tell you about Litchfield."

"Maybe you do. I've been away for six years. Tell me, are they having labor trouble now?"

"Labor trouble?" The mate was surprised. "You mean with the farm-tramps? Ten of them for every job, if you call that trouble."

"Well, I noticed you have steel gratings over the gangway heads to the lower deck, and all your crewmen are armed. Not just pistols, either."

"Well, I guess you'd call them that. A gang'll come aboard, dressed like farm-tramps; they'll have tommy guns and sawed-off shotguns in their bindles. When the ship's airborne and out of reach of help, they'll break out their guns and take her. Usually kill all the crew and passengers. They don't like to leave live witnesses," the mate said. "You heard about the Harriet Barne, didn't you?"

She was Transcontinent & Overseas, the biggest contragravity ship on the planet.

"They didn't pirate her, did they?"

The mate nodded. "Six months ago; Blackie Perales' gang. There was just a tag end of a radio call, that ended in a shot. Time the Air Patrol got to her estimated position it was too late. Nobody's ever seen ship, officers, crew or passengers since."

"Well, great Ghu; isn't the Government doing anything about it?"