The Corporation of London, Its Rights and Privileges 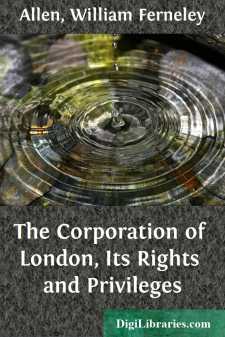 The first historical notice of the City of London occurs in that portion of the Annals of Tacitus which treats of the insurrection of Boadicea. At that time it was a place much frequented by merchants, attracted partly by the natural advantages of the site, and partly by the vicinity of the Roman camp at Islington. It is stated that 70,000 persons, of both sexes and of all ages, were massacred by that fierce heroine in London and at St. Albans; but it must not be supposed that the ordinary population of those two towns could have formed so large an aggregate. It is far more probable that numbers of old men, women, and children flocked thither from the neighbourhood, in the hope of escaping from the violence and rapine of the patriot army. Their expectations, however, were disappointed, as the Roman general deemed it more prudent to evacuate an untenable post, than to risk the dominion of the entire island on the event of a battle fought under adverse circumstances. At the same time the slaughter of the inhabitants justifies the inference that they were foreigners rather than natives, some being traders from Gaul, but the majority either Roman colonists or the followers and hangers-on of the stationary camp. Indeed, it may be gathered from the description of Tacitus, that these traders were chiefly commissariat contractors and brokers or money-changers. The Romans do not appear to have evinced a high order of commercial instinct, nor to have looked upon the development of trade as one of the chief objects of government. Their mission was to overrun other nations, and to prevent them from indulging in internecine warfare. To them mankind are therefore indebted for the preservation of whatever civilization was then extant, and for stopping the retrogressive course of the human race. This was particularly observable in their conquest of Greece and the kingdoms of Asia Minor, where incessant quarrels between rival cities and principalities had checked the progress of the arts, sciences, and literature. Content to conquer in battle, and, as the just reward of their superior prowess, to impose tribute and a governor, they seldom interfered with local customs and usages. Perhaps one great secret of their marvellous success was this systematic abstinence from intermeddling with the local administrations. The principle of self-government was never more fully appreciated than by this remarkable people, who, sending forth consuls, vice-consuls, and prefects, yet left to the conquered the management of their own affairs and the guardianship of their own interests. Not even in the most corrupt days of the empire was it attempted to absorb the patronage of every department and province for the benefit of a few, under the pretext of imparting greater vigour to the administration of public affairs by centralization. It was not deemed wise or necessary to constitute central boards for the direction of matters with which not a single member might, possibly, be acquainted. They did not aim at an ideal perfection, but were satisfied with doing what was practicable, and with a large average of general prosperity. To each civitas—corresponding to our phrase of "city and county"—was assigned the regulation of its own domestic policy, by means of annual magistrates, a chosen senate, and the general assembly of the free inhabitants. Through this wise policy of non-interference, the City of London rapidly acquired wealth and importance, and before the evacuation of the island by the Romans, had attained a position of considerable grandeur. The civic institutions of the Saxons were, indeed, admirably suited for the adaptation of the municipal customs bequeathed to them by their predecessors, and which became developed to their full proportions through the greater amount of individual liberty that prevailed among the Germanic races.

Of the purely Teutonic institutions, one of the most characteristic was that of Gilds. Originally, a gild was nothing more than an association of ten families, for purposes of mutual protection and security. By the custom of "frankpledge," every freeman at the age of fourteen was called upon to give securities for his good behaviour. Gilds were therefore formed, binding themselves to produce the offender if any breach of the peace was committed by one of their members, or to give redress to the injured party. To carry out these objects a small fund was raised, to which every one contributed; and thence was derived the name of the association: "gildan," in Saxon, signifying to pay. With a view to becoming better acquainted with one another, and to draw more closely the bands of friendship, convivial meetings were held at fixed periods, when a vast quantity of beer was quaffed in honour of the living, and to the memory of the dead. In after-times this truly Saxon institution assumed greater proportions, and embraced both ecclesiastical and secular gilds. Of the former it is unnecessary to make further mention, but the latter formed the germ of the present livery companies. The earlier secular or mercantile gilds were associations of members of a particular trade or craft, for the purpose of maintaining and advancing the privileges of their peculiar calling. The term was also applied to a district or "soke," possessed of independent franchises, as in the case of the Portsoken Ward, which was anciently known as the Cnighten Gild. A "soke," or soca, it may be incidentally observed, was the territory in which was exercised the soca, or the privilege of hearing causes and disputes, levying fines, and administering justice within certain limits. The practice of gildating or embodying the aggregate free population of a town was of considerably later date. In France and in Flanders, corporations and communes, or commonalties, appear to have existed in the middle of the eleventh century, but the earliest mention of the Corporation of London occurs in the second year of the reign of Richard I. Availing himself of the king's absence in the Holy Land, his brother John, Earl of Moreton, anxious to acquire the co-operation of the city of London in his traitorous designs upon the crown, convened a general assembly of the citizens, and confirmed their ancient rights and privileges by a formal deed or charter. It was then, for the first time, that the commonalty of the city was regularly and officially recognized as a corporate body. The distinctive rights of a town corporation were the election of a council presided over by a mayor or bailiff, a common seal, a bell to convoke the citizens, and local jurisdiction.

But although it was not before the reign of Richard I. that the citizens of London were formed into a body corporate, they had enjoyed, as the inhabitants of a free burgh, the immunities and many essential privileges of a corporation, from the time of Edward the Confessor, if not of Alfred....