The Copy-Cat and Other Stories 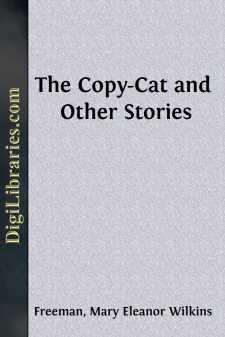 THAT affair of Jim Simmons's cats never became known. Two little boys and a little girl can keep a secret—that is, sometimes. The two little boys had the advantage of the little girl because they could talk over the affair together, and the little girl, Lily Jennings, had no intimate girl friend to tempt her to confidence. She had only little Amelia Wheeler, commonly called by the pupils of Madame's school "The Copy-Cat."

Amelia was an odd little girl—that is, everybody called her odd. She was that rather unusual creature, a child with a definite ideal; and that ideal was Lily Jennings. However, nobody knew that. If Amelia's mother, who was a woman of strong character, had suspected, she would have taken strenuous measures to prevent such a peculiar state of affairs; the more so because she herself did not in the least approve of Lily Jennings. Mrs. Diantha Wheeler (Amelia's father had died when she was a baby) often remarked to her own mother, Mrs. Stark, and to her mother-in-law, Mrs. Samuel Wheeler, that she did not feel that Mrs. Jennings was bringing up Lily exactly as she should. "That child thinks entirely too much of her looks," said Mrs. Diantha. "When she walks past here she switches those ridiculous frilled frocks of hers as if she were entering a ballroom, and she tosses her head and looks about to see if anybody is watching her. If I were to see Amelia doing such things I should be very firm with her."

"Lily Jennings is a very pretty child," said Mother-in-law Wheeler, with an under-meaning, and Mrs. Diantha flushed. Amelia did not in the least resemble the Wheelers, who were a handsome set. She looked remarkably like her mother, who was a plain woman, only little Amelia did not have a square chin. Her chin was pretty and round, with a little dimple in it. In fact, Amelia's chin was the prettiest feature she had. Her hair was phenomenally straight. It would not even yield to hot curling-irons, which her grandmother Wheeler had tried surreptitiously several times when there was a little girls' party. "I never saw such hair as that poor child has in all my life," she told the other grandmother, Mrs. Stark. "Have the Starks always had such very straight hair?"

Mrs. Stark stiffened her chin. Her own hair was very straight. "I don't know," said she, "that the Starks have had any straighter hair than other people. If Amelia does not have anything worse to contend with than straight hair I rather think she will get along in the world as well as most people."

"It's thin, too," said Grandmother Wheeler, with a sigh, "and it hasn't a mite of color. Oh, well, Amelia is a good child, and beauty isn't everything." Grandmother Wheeler said that as if beauty were a great deal, and Grandmother Stark arose and shook out her black silk skirts. She had money, and loved to dress in rich black silks and laces.

"It is very little, very little indeed," said she, and she eyed Grandmother Wheeler's lovely old face, like a wrinkled old rose as to color, faultless as to feature, and swept about by the loveliest waves of shining silver hair....