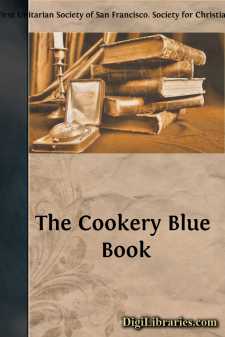 Pour on the water, and let it simmer six hours, skimming carefully, for if any grease is allowed to go back into the soup it is impossible to make it clear. Scrape the carrots, stick 4 whole cloves into each onion, and put them in the soup; then add the celery seed, parsley, mace, pepper and salt. Let this boil till the vegetables are tender, then strain through a cloth, pouring the soup through first, then putting the meat in it to drain, never squeezing or pressing it.

If you wish to color it, you can put in a dessertspoon of burnt sugar. It can be nicely flavored by adding some walnut catsup, together with mushroom and a very little Worcestershire.

Boil trimmings of roast beef and beef-steak bones for three hours. Cool and skim off fat; add half a salt spoon of pepper, 2 teaspoonfuls of salt, 3 potatoes, pared and cut up, 1/2 a carrot, 1/2 an onion, 3 gumbo pods, half a bay leaf and a little chopped parsley. Add a few drops of caramel and serve hot. Strain, if preferred thin.

1 dozen tomatoes cut up and enough water to cover them; a salt spoon of mustard, salt and 2 dozen cloves. Stew thoroughly and strain. Rub together 2 heaping tablespoons of flour and a piece of butter the size of an egg. Put this in the strained liquor and boil. This makes soup for six persons.

Boil 1 can of tomatoes very soft in 1 quart of water; strain, and add 1 pint of milk, 1 teaspoonful of soda, small piece of butter, a shake of mace, and salt to taste. Let it scald, not boil, and add 2 rolled crackers.

2 large onions sliced, 1 can tomatoes. Boil together half an hour or longer, then put through colander and add 1 quart beef stock, salt and pepper. Let this boil together a few moments. Whip 1 cup cream with the yolks of 4 eggs and 1 tablespoon of corn starch or flour; add this to the stock, boil up, and serve at once.

1 quart tomatoes, 3 pints milk, 1 large tablespoonful flour, butter size of an egg, pepper and salt to taste, a scant teaspoonful of soda. Put the tomato on to stew and the milk in a double kettle to boil, reserving half a cup to mix with flour. Mix the flour smoothly with the cold milk and cook ten minutes.

To the tomato add the soda, stir well, and rub through a strainer that is fine enough to keep back the seeds. Add butter, salt and pepper to the milk and then the tomato. Serve immediately.

1 coffee cup of brown beans soaked over night; boil in a gallon of water with a piece of salt pork 3 inches square (a little beef is good, also) several hours, until beans are soft; strain, and add a small bit of butter, the juice of 1 lemon and a small cup of sherry wine.

1 pint of beans soaked over night; 2 quarts water and boil five or six hours, adding water as it boils away; when soft, strain out the skins, season with salt and pepper to taste. When ready for the table add a large spoonful of sherry wine, 2 boiled eggs, sliced, and 1 lemon, sliced very thin. Do not cook it any after these ingredients are added.

1 gallon water, 1 quart peas, soaked over night; 1/4 pound salt pork cut in bits; 1 pound lean beef cut the same. Boil slowly two hours, or until the water is reduced one-half. Pour in a colander and press the peas through; return to the kettle and add a small amount of celery chopped fine. Fry three or four slices of bread quite brown in butter—cut in squares when served.

Soak a quart of dried peas over night. In the morning put them on to boil with fragments of fresh meat; also cloves, allspice, pepper and salt....