The Constitution of Japan, 1946 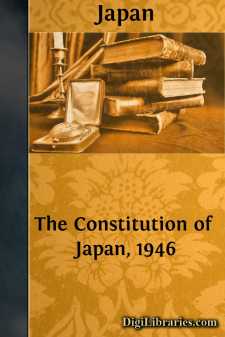 CHAPTER I. THE EMPEROR

Article 1. The Emperor shall be the symbol of the State and of the unity of the people, deriving his position from the will of the people with whom resides sovereign power.

Article 2. The Imperial Throne shall be dynastic and succeeded to in accordance with the Imperial House law passed by the Diet.

Article 4. The Emperor shall perform only such acts in matters of state as are provided for in this Constitution and he shall not have powers related to government

(2) The Emperor may delegate the performance of his acts in matters of state as may be provided by law.

Article 5. When, in accordance with the Imperial House law, a Regency is established, the Regent shall perform his acts in matter of state in the Emperor's name. In this case, paragraph one of the article will be applicable.

Article 6. The Emperor shall appoint the Prime Minister asdesignated by the Diet.

(2) The Emperor shall appoint the Chief Judge of the SupremeCourt as designated by the Cabinet.

Article 7. The Emperor, with the advice and approval of the Cabinet, shall perform the following acts in makers of state on behalf of the people:

(i) Promulgation of amendments of the constitution, laws, cabinet orders and treaties;

(ii) Convocation of the Diet;

(iii) Dissolution of the House of Representatives;

(iv) Proclamation of general election of members of the Diet;

(v) Attestation of the appointment and dismissal of Ministers of State and other officials as provided for by law, and of full powers and credentials of Ambassadors and Ministers;

(vi) Attestation of general and special amnesty, commutation of punishment, reprieve, and restoration of rights;

(viii) Attestation of instruments of ratification and other diplomatic documents as provided for by law;

Article 8. No property can be given to, or received by, the Imperial House, nor can any gifts be made therefrom, without the authorization of the Diet.

Article 9. Aspiring sincerely to an international peace based on justice and order, the Japanese people forever renounce war as a sovereign right of the nation and the threat or use of force as a mean of settling international disputes.

(2) In order to accomplish the aim of the preceding paragraph, land, sea, and air forces, as well as other war potential, will never be maintained. The right of belligerency of the state will not be recognized.

CHAPTER III. RIGHTS AND DUTIES OF THE PEOPLE

Article 10. The conditions necessary for being a Japanese national shall be determined by law.