The Constable's Move Captains All, Book 4. 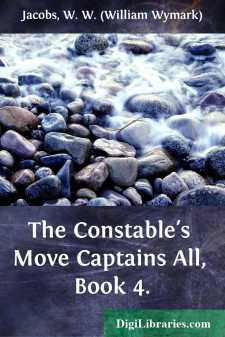 Mr. Bob Grummit sat in the kitchen with his corduroy-clad legs stretched on the fender. His wife's half-eaten dinner was getting cold on the table; Mr. Grummit, who was badly in need of cheering up, emptied her half-empty glass of beer and wiped his lips with the back of his hand.

He gave a little laugh at the sarcasm, and sticking his short pipe in his mouth lurched slowly to the front-room door and scowled at his wife as she lurked at the back of the window watching intently the furniture which was being carried in next door.

"Come away or else you'll be locked up," repeated Mr. Grummit. "You mustn't look at policemen's furniture; it's agin the law."

Mrs. Grummit made no reply, but, throwing appearances to the winds, stepped to the window until her nose touched, as a walnut sideboard with bevelled glass back was tenderly borne inside under the personal supervision of Police-Constable Evans.

"They'll be 'aving a pianner next," said the indignant Mr. Grummit, peering from the depths of the room.

"They've got one," responded his wife; "there's the end if it stickin' up in the van."

Mr. Grummit advanced and regarded the end fixedly. "Did you throw all them tin cans and things into their yard wot I told you to?" he demanded.

"He picked up three of 'em while I was upstairs," replied his wife. "I 'eard 'im tell her that they'd come in handy for paint and things."

"That's 'ow coppers get on and buy pianners," said the incensed Mr. Grummit, "sneaking other people's property. I didn't tell you to throw good 'uns over, did I? Wot d'ye mean by it?"

Mrs. Grummit made no reply, but watched with bated breath the triumphal entrance of the piano. The carman set it tenderly on the narrow footpath, while P. C. Evans, stooping low, examined it at all points, and Mrs. Evans, raising the lid, struck a few careless chords.

"Showing off," explained Mrs. Grummit, with a half turn; "and she's got fingers like carrots."

"It's a disgrace to Mulberry Gardens to 'ave a copper come and live in it," said the indignant Grummit; "and to come and live next to me!— that's what I can't get over. To come and live next door to a man wot has been fined twice, and both times wrong. Why, for two pins I'd go in and smash 'is pianner first and 'im after it. He won't live 'ere long, you take my word for it."

"Why not?" inquired his wife.

"Why?" repeated Mr. Grummit. "Why? Why, becos I'll make the place too 'ot to hold him. Ain't there enough houses in Tunwich without 'im a-coming and living next door to me?"

For a whole week the brain concealed in Mr. Grummit's bullet-shaped head worked in vain, and his temper got correspondingly bad. The day after the Evans' arrival he had found his yard littered with tins which he recognized as old acquaintances, and since that time they had travelled backwards and forwards with monotonous regularity. They sometimes made as many as three journeys a day, and on one occasion the heavens opened to drop a battered tin bucket on the back of Mr....