The Conservation of Races The American Negro Academy. Occasional Papers No. 2 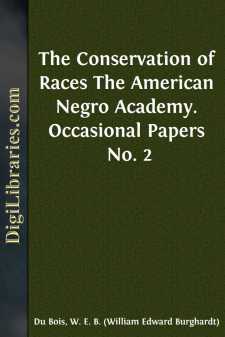 THE CONSERVATION OF RACES.

The American Negro has always felt an intense personal interest in discussions as to the origins and destinies of races: primarily because back of most discussions of race with which he is familiar, have lurked certain assumptions as to his natural abilities, as to his political, intellectual and moral status, which he felt were wrong. He has, consequently, been led to deprecate and minimize race distinctions, to believe intensely that out of one blood God created all nations, and to speak of human brotherhood as though it were the possibility of an already dawning to-morrow.

Nevertheless, in our calmer moments we must acknowledge that human beings are divided into races; that in this country the two most extreme types of the world’s races have met, and the resulting problem as to the future relations of these types is not only of intense and living interest to us, but forms an epoch in the history of mankind.

It is necessary, therefore, in planning our movements, in guiding our future development, that at times we rise above the pressing, but smaller questions of separate schools and cars, wage-discrimination and lynch law, to survey the whole question of race in human philosophy and to lay, on a basis of broad knowledge and careful insight, those large lines of policy and higher ideals which may form our guiding lines and boundaries in the practical difficulties of every day. For it is certain that all human striving must recognize the hard limits of natural law, and that any striving, no matter how intense and earnest, which is against the constitution of the world, is vain. The question, then, which we must seriously consider is this: What is the real meaning of Race; what has, in the past, been the law of race development, and what lessons has the past history of race development to teach the rising Negro people?

When we thus come to inquire into the essential difference of races we find it hard to come at once to any definite conclusion. Many criteria of race differences have in the past been proposed, as color, hair, cranial measurements and language. And manifestly, in each of these respects, human beings differ widely. They vary in color, for instance, from the marble-like pallor of the Scandinavian to the rich, dark brown of the Zulu, passing by the creamy Slav, the yellow Chinese, the light brown Sicilian and the brown Egyptian. Men vary, too, in the texture of hair from the obstinately straight hair of the Chinese to the obstinately tufted and frizzled hair of the Bushman. In measurement of heads, again, men vary; from the broad-headed Tartar to the medium-headed European and the narrow-headed Hottentot; or, again in language, from the highly-inflected Roman tongue to the monosyllabic Chinese. All these physical characteristics are patent enough, and if they agreed with each other it would be very easy to classify mankind. Unfortunately for scientists, however, these criteria of race are most exasperatingly intermingled. Color does not agree with texture of hair, for many of the dark races have straight hair; nor does color agree with the breadth of the head, for the yellow Tartar has a broader head than the German; nor, again, has the science of language as yet succeeded in clearing up the relative authority of these various and contradictory criteria....