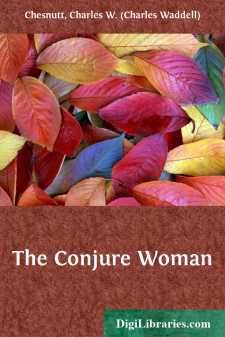 Some years ago my wife was in poor health, and our family doctor, in whose skill and honesty I had implicit confidence, advised a change of climate. I shared, from an unprofessional standpoint, his opinion that the raw winds, the chill rains, and the violent changes of temperature that characterized the winters in the region of the Great Lakes tended to aggravate my wife's difficulty, and would undoubtedly shorten her life if she remained exposed to them. The doctor's advice was that we seek, not a temporary place of sojourn, but a permanent residence, in a warmer and more equable climate. I was engaged at the time in grape-culture in northern Ohio, and, as I liked the business and had given it much study, I decided to look for some other locality suitable for carrying it on. I thought of sunny France, of sleepy Spain, of Southern California, but there were objections to them all. It occurred to me that I might find what I wanted in some one of our own Southern States. It was a sufficient time after the war for conditions in the South to have become somewhat settled; and I was enough of a pioneer to start a new industry, if I could not find a place where grape-culture had been tried. I wrote to a cousin who had gone into the turpentine business in central North Carolina. He assured me, in response to my inquiries, that no better place could be found in the South than the State and neighborhood where he lived; the climate was perfect for health, and, in conjunction with the soil, ideal for grape-culture; labor was cheap, and land could be bought for a mere song. He gave us a cordial invitation to come and visit him while we looked into the matter. We accepted the invitation, and after several days of leisurely travel, the last hundred miles of which were up a river on a sidewheel steamer, we reached our destination, a quaint old town, which I shall call Patesville, because, for one reason, that is not its name. There was a red brick market-house in the public square, with a tall tower, which held a four-faced clock that struck the hours, and from which there pealed out a curfew at nine o'clock. There were two or three hotels, a court-house, a jail, stores, offices, and all the appurtenances of a county seat and a commercial emporium; for while Patesville numbered only four or five thousand inhabitants, of all shades of complexion, it was one of the principal towns in North Carolina, and had a considerable trade in cotton and naval stores. This business activity was not immediately apparent to my unaccustomed eyes. Indeed, when I first saw the town, there brooded over it a calm that seemed almost sabbatic in its restfulness, though I learned later on that underneath its somnolent exterior the deeper currents of life—love and hatred, joy and despair, ambition and avarice, faith and friendship—flowed not less steadily than in livelier latitudes.

We found the weather delightful at that season, the end of summer, and were hospitably entertained. Our host was a man of means and evidently regarded our visit as a pleasure, and we were therefore correspondingly at our ease, and in a position to act with the coolness of judgment desirable in making so radical a change in our lives....