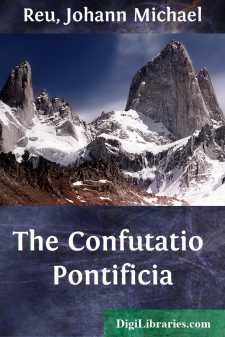 Part I. To Article I.

Especially when in the first article they confess the unity of the divine essence in three persons according to the decree of the Council of Nice, their Confession must be accepted, since it agrees in all respects with the rule of faith and the Roman Church. For the Council of Nice, convened under the Emperor Constantine the Great, has always been regarded inviolable, whereat three hundred and eighteen bishops eminent and venerable for holiness of life, martyrdom and learning, after investigating and diligently examining the Holy Scriptures, set forth this article which they here confess concerning the unity of the essence and the trinity of persons. So too their condemnation of all heresies arising contrary to this article must be accepted—viz. the Manichaeans, Arians, Eunomians, Valentinians, Samosatanes, for the Holy Catholic Church has condemned these of old.

In the second article we approve their Confession, in common with the Catholic Church, that the fault of origin is truly sin, condemning and bringing eternal death upon those who are not born again by baptism and the Holy Ghost. For in this they properly condemn the Pelagians, both modern and ancient, who have been long since condemned by the Church. But the declaration of the article, that Original Sin is that men are born without the fear of God and without trust in God, is to be entirely rejected, since it is manifest to every Christian that to be without the fear of God and without trust in God is rather the actual guilt of an adult than the offence of a recently-born infant, which does not possess as yet the full use of reason, as the Lord says "Your children which had no knowledge between good and evil," Deut 1:39. Moreover, the declaration is also rejected whereby they call the fault of origin concupiscence, if they mean thereby that concupiscence is a sin that remains sin in a child even after baptism. For the Apostolic See has already condemned two articles of Martin Luther concerning sin remaining in a child after baptism, and concerning the fomes of sin hindering a soul from entering the kingdom of heaven. But if, according to the opinion of St Augustine, they call the vice of origin concupiscence, which in baptism ceases to be sin, this ought to be accepted, since indeed according to the declaration of St. Paul, we are all born children of wrath (Eph. 2:3), and in Adam we all have sinned (Rom.5:12).

In the third article there is nothing to offend, since the entire Confession agrees with the Apostles' Creed and the right rule of faith—viz. the Son of God became incarnate, assumed human nature into the unity of his person, was born of the Virgin Mary, truly suffered was crucified, died, descended to hell, rose again on the third day, ascended to heaven, and sat down at the right hand of the Father.

In the fourth article the condemnation of the Pelagians, who thought that man can merit eternal life by his own powers without the grace of God, is accepted as Catholic and in accordance with the ancient councils, for the Holy Scriptures expressly testify to this....