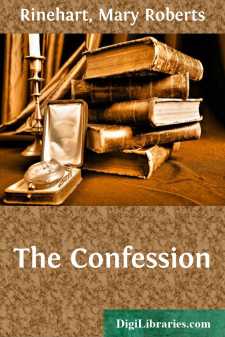 I am not a susceptible woman. I am objective rather than subjective, and a fairly full experience of life has taught me that most of my impressions are from within out rather than the other way about. For instance, obsession at one time a few years ago of a shadowy figure on my right, just beyond the field of vision, was later exposed as the result of a defect in my glasses. In the same way Maggie, my old servant, was during one entire summer haunted by church-bells and considered it a personal summons to eternity until it was shown to be in her inner ear.

Yet the Benton house undeniably made me uncomfortable. Perhaps it was because it had remained unchanged for so long. The old horsehair chairs, with their shiny mahogany frames, showed by the slightly worn places in the carpet before them that they had not deviated an inch from their position for many years. The carpets—carpets that reached to the very baseboards and gave under one's feet with the yielding of heavy padding beneath—were bright under beds and wardrobes, while in the centers of the rooms they had faded into the softness of old tapestry.

Maggie, I remember, on our arrival moved a chair from the wall in the library, and immediately put it back again, with a glance to see if I had observed her.

"It's nice and clean, Miss Agnes," she said. "A—I kind of feel that a little dirt would make it more homelike."

"I'm sure I don't see why," I replied, rather sharply, "I've lived in a tolerably clean house most of my life."

Maggie, however, was digging a heel into the padded carpet. She had chosen a sunny place for the experiment, and a small cloud of dust rose like smoke.

"Germs!" she said. "Just what I expected. We'd better bring the vacuum cleaner out from the city, Miss Agnes. Them carpets haven't been lifted for years."

But I paid little attention to her. To Maggie any particle of matter not otherwise classified is a germ, and the prospect of finding dust in that immaculate house was sufficiently thrilling to tide over the strangeness of our first few hours in it.

Once a year I rent a house in the country. When my nephew and niece were children, I did it to take them out of the city during school vacations. Later, when they grew up, it was to be near the country club. But now, with the children married and new families coming along, we were more concerned with dairies than with clubs, and I inquired more carefully about the neighborhood cows than about the neighborhood golf-links. I had really selected the house at Benton Station because there was a most alluring pasture, with a brook running through it, and violets over the banks. It seemed to me that no cow with a conscience could live in those surroundings and give colicky milk.

Then, the house was cheap. Unbelievably cheap. I suspected sewerage at once, but it seemed to be in the best possible order. Indeed, new plumbing had been put in, and extra bathrooms installed. As old Miss Emily Benton lived there alone, with only an old couple to look after her, it looked odd to see three bathrooms, two of them new, on the second floor. Big tubs and showers, although little old Miss Emily could have bathed in the washbowl and have had room to spare.

I faced the agent downstairs in the parlor, after I had gone over the house. Miss Emily Benton had not appeared and I took it she was away.

"Why all those bathrooms?" I demanded. "Does she use them in rotation?"

He shrugged his shoulders.

"She wished to rent the house, Miss Blakiston. The old-fashioned plumbing—"

"But she is giving the house away," I exclaimed....