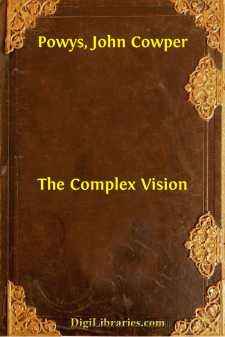 What I am anxious to attempt in this anticipatory summary of the contents of this book is a simple estimate of its final conclusions, in such a form as shall eliminate all technical terms and reduce the matter to a plain statement, intelligible as far as such a thing can be made intelligible, to the apprehension of such persons as have not had the luck, or the ill-luck, of a plunge into the ocean of metaphysic.

A large portion of the book deals with what might be called our instrument of research; in other words, with the problem of what particular powers of insight the human mind must use, if its vision of reality is to be of any deeper or more permanent value than the "passing on the wing," so to speak, of individual fancies and speculations.

This instrument of research I find to be the use, by the human person, of all the various energies of personality concentrated into one point; and the resultant spectacle of things or reality of things, which this concentrated vision makes clear, I call the original revelation of the complex vision of man.

Having analyzed in the earlier portions of the book the peculiar nature of our organ of research and the peculiar difficulties—amounting to a very elaborate work of art—which have to be overcome before this concentration takes place, I proceed in the later portions of the book to make as clear as I can what kind of reality it is that we actually do succeed in grasping, when this concentrating process has been achieved. I indicate incidentally that this desirable concentration of the energies of personality is so difficult a thing that we are compelled to resort to our memory of what we experienced in rare and fortunate moments in order to establish its results. I suggest that it is not to our average moments of insight that we have to appeal, but to our exceptional moments of insight; since it is only at rare moments in our lives that we are able to enter into what I call the eternal vision.

To what, then, does this conclusion amount, and what is this resultant reality, in as far as we are able to gather it up and articulate its nature from the vague records of our memory?

I have endeavoured to show that it amounts to the following series of results. What we are, in the first place, assured of is the existence within our own individual body of a real actual living thing composed of a mysterious substance wherein what we call mind and what we call matter are fused and intermingled. This is our real and self-conscious soul, the thing in us which says, "I am I," of which the physical body is only one expression, and of which all the bodily senses are only one gateway of receptivity.