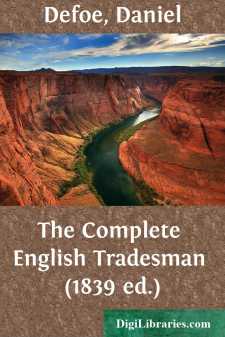 Being to direct this discourse to the tradesmen of this nation, it is needful, in order to make the substance of this work and the subject of it agree together, that I should in a few words explain the terms, and tell the reader who it is we understand by the word tradesman, and how he is to be qualified in order to merit the title of complete.

This is necessary, because the said term tradesman is understood by several people, and in several places, in a different manner: for example, in the north of Britain, and likewise in Ireland, when you say a tradesman, you are understood to mean a mechanic, such as a smith, a carpenter, a shoemaker, and the like, such as here we call a handicraftsman. In like manner, abroad they call a tradesman such only as carry goods about from town to town, and from market to market, or from house to house, to sell; these in England we call petty chapmen, in the north pethers, and in our ordinary speech pedlars.

But in England, and especially in London, and the south parts of Britain, we take it in another sense, and in general, all sorts of warehouse-keepers, shopkeepers, whether wholesale dealers or retailers of goods, are called tradesmen, or, to explain it by another word, trading men: such are, whether wholesale or retail, our grocers, mercers, linen and woollen drapers, Blackwell-hall factors, tobacconists, haberdashers, whether of hats or small wares, glovers, hosiers, milliners, booksellers, stationers, and all other shopkeepers, who do not actually work upon, make, or manufacture, the goods they sell.

On the other hand, those who make the goods they sell, though they do keep shops to sell them, are not called tradesmen, but handicrafts, such as smiths, shoemakers, founders, joiners, carpenters, carvers, turners, and the like; others, who only make, or cause to be made, goods for other people to sell, are called manufacturers and artists, &c. Thus distinguished, I shall speak of them all as occasion requires, taking this general explication to be sufficient; and I thus mention it to prevent being obliged to frequent and further particular descriptions as I go on.

As there are several degrees of people employed in trade below these, such as workmen, labourers, and servants, so there is a degree of traders above them, which we call merchants; where it is needful to observe, that in other countries, and even in the north of Britain and Ireland, as the handicraftsmen and artists are called tradesmen, so the shopkeepers whom we here call tradesmen, are all called merchants; nay, even the very pedlars are called travelling merchants. But in England the word merchant is understood of none but such as carry on foreign correspondences, importing the goods and growth of other countries, and exporting the growth and manufacture of England to other countries; or, to use a vulgar expression, because I am speaking to and of those who use that expression, such as trade beyond sea. These in England, and these only, are called merchants, by way of honourable distinction; these I am not concerned with in this work, nor is any part of it directed to them....