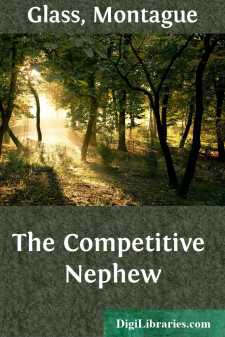 "That's the way it goes," Sam Zaretsky cried bitterly. "You raise a couple of young fellers up in your business, Max, and so soon they know all you could teach 'em they turn around and go to work and do you every time."

"I told it you when we started in as new beginners, Sam, you should got a lady bookkeeper," he said. "The worst they could do is to get married on you, and all you are out is a couple dollars cut-glass for an engagement present and half a dozen dessert spoons for the wedding. But so soon as you hire a man for a bookkeeper, Sam, he gets a line on your customers, and the first thing you know he goes as partners together with your designer, and what could you do? Ain't it?"

"Not all our trade, Max," Sam declared. "Gott sei dank, we got a few good customers what them suckers couldn't steal off of us. We got, anyhow, Aaron Pinsky. I seen Aaron on the subway this morning, and he says he would be in to see us this afternoon yet."

"That's nothing new, Sam. That feller comes in here whenever he's downtown. I guess some of our customers think he's a partner here."

"Let 'em think so, Max, it don't do us no harm that people should think we got it a rich man like Pinsky for a partner."

"Sure, I know," Fatkin rejoined. "But the feller takes liberties around here, Sam. He tells us what we should do and what we shouldn't do. If it wouldn't be that Pinsky was all the time cracking up Louis Sen I would of fired him schon long since already. Louis was always too independent, anyhow, and if we would of got rid of him a year ago, Sam, he wouldn't have gone as partners together with Hillel Greenberg, and we wouldn't now be bucking up against a couple of dangerous competitors."

"That's all right, Max. As I told you before, Aaron Pinsky is a good customer of ours, and if a good customer butts into your business he is only taking an interest in you; whereas, if a fellow which only buys from you goods occasionally, y'understand, butts in, then he's acting fresh and you could tell him so."

"But Pinsky butts into our business so much, Sam, that if he was the best customer a concern ever had, Sam, he would be fresh anyhow. The feller actually tells me yesterday he is going to bring us a new bookkeeper."

"A new bookkeeper!" Zaretsky exclaimed. "Why, we already got it a new bookkeeper, Max. I thought we hired it Miss Meyerson what used to be with Klinger & Klein. She's coming to work here Monday. Ain't it?"

"Sure, she is," Fatkin replied.

"You tell him," he said. "I didn't got the nerve, Sam, because you know as well as I do, Sam, if I would turn him down and he gets mad, Sam, the first thing you know we are out a good customer and Greenberg & Sen would get him sure."

"Well, we got to go about this with a little diploomasher, y'understand."