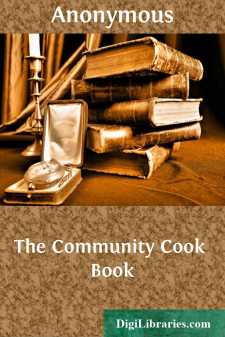 The Community Cook Book is a collection of recipes chosen from many hundreds that may well be considered representative of the best to be found in any of the more intelligent and progressive of American Communities in which a part of the population make occasional visits to all parts of the country from which they bring back choice recipes to contribute to the neighborhood fund. Added to this, that constant change and interchange of a part of the population, and if the best recipes of such a section be carefully selected and classified, then in a real American Community's Cook Book, such as this, we have one of the most valuable practical cook books in the world.

In presenting this cook book, the compilers were guided by the fact that what each housekeeper needs, is not so much a great variety of ways, but a few successful ways of preparing each article of food.

One level pint cornmeal scalded, one level tablespoonful salt, one cup New Orleans molasses, two teaspoonfuls soda over which pour a little boiling water, one pint sour milk; put half the soda in the molasses and the remainder in the milk. Stiffen with Graham flour. Steam four hours, and brown in oven for about fifteen minutes.

One cake yeast, one coffee-cup cornmeal, two coffee-cups buckwheat, one teaspoonful salt, one quart tepid water. Before cooking, add four tablespoonfuls milk and two of molasses in which you have stirred a teaspoonful of soda.

One pint of milk, four ounces butter, one teaspoonful salt, one cake compressed yeast, three cups flour. Scald milk and let stand until lukewarm, then add salt and flour, beat vigorously, then add butter melted and the yeast, beat again, cover and stand in a warm place until very light. Grease muffin rings and place them on a hot griddle. Fill each ring half full of batter. Bake until brown on one side, then turn and brown the other side. Take from the fire and stand aside until wanted. When ready to use, steam and serve with butter, marmalade, syrup, jam, or anything else desired.