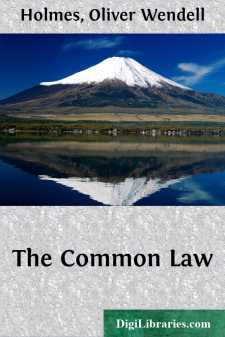 In this matter the general conclusion follows from a single instance. For the moment it is admitted that in one case knowledge of a present fact, such as the other party's intent to act on the false statement, dispenses with proof of an intent to induce him to act upon it, it is admitted that the lesser element is all that is necessary in the larger compound. For intent embraces knowledge sufficing for foresight, as has been shown. Hence, when you prove intent you prove knowledge, and intent may often [134] be the easier to prove of the two. But when you prove knowledge you do not prove intent.

It may be said, however, that intent is implied or presumed in such a case as has been supposed. But this is only helping out a false theory by a fiction. It is very much like saying that a consideration is presumed for an instrument under seal; which is merely a way of reconciling the formal theory that all contracts must have a consideration with the manifest fact that sealed instruments do not require one. Whenever it is said that a certain thing is essential to liability, but that it is conclusively presumed from something else, there is always ground for suspicion that the essential clement is to be found in that something else, and not in what is said to be presumed from it.

With regard to the intent necessary to deceit, we need not stop with the single instance which has been given. The law goes no farther than to require proof either of the intent, or that the other party was justified in inferring such intention. So that the whole meaning of the requirement is, that the natural and manifest tendency of the representation, under the known circumstances, must have been to induce the opinion that it was made with a view to action, and so to induce action on the faith of it. The standard of what is called intent is thus really an external standard of conduct under the known circumstances, and the analysis of the criminal law holds good here.

Nor is this all. The law pursuing its course of specification, as explained in the last Lecture, decides what is the tendency of representations in certain cases,—as, for instance, that a horse is sound at the time of making a [135] sale; or, in general, of any statement of fact which it is known the other party intends to rely on. Beyond these scientific rules lies the vague realm of the jury.

The other moral element in deceit is knowledge that the statement was false. With this I am not strictly concerned, because all that is necessary is accomplished when the elements of risk are reduced to action and knowledge. But it will aid in the general object of showing that the tendency of the law everywhere is to transcend moral and reach external standards, if this knowledge of falsehood can be transmuted into a formula not necessarily importing guilt, although, of course, generally accompanied by it in fact. The moment we look critically at it, we find the moral side shade away.

The question is, what known circumstances are enough throw the risk of a statement upon him who makes it, if it induces another man to act, and it turns out untrue. Now, it is evident that a man may take the risk of his statement by express agreement, or by an implied one which the law reads into his bargain. He may in legal language warrant the truth of it, and if it is not true, the law treats it as a fraud, just as much when he makes it fully believing it, as when he knows that it is untrue, and means to deceive. If, in selling a horse, the seller warranted him to be only five years old, and in fact he was thirteen, the seller could be sued for a deceit at common law, although he thought the horse was only five....