The Comedies of William Congreve Volume 1 [of 2] 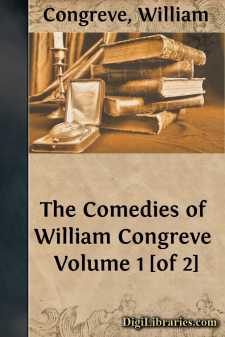 For one may apprehend the whole truth to be somewhat thus.  Satiric comedy, or comedy of manners, is the art of making ludicrous in dramatic form some phase of life.  The writers of our old comedy thought that certain vices—gambling, adultery, and the like—formed a phase of life which for divers reasons, essential and accidental, lent itself best to their purpose.  They may, or may not, have thought they were doing society a service: their real justification is that, as artists, they had to take for their art that material they could use best.  They used it according to their lights: Wycherley with a coarse and heavy hand, so that it became nauseous; Etherege with a light touch and a gay perception; Congreve with an instinct of good-breeding, with a sure and extensive observation, and with an incomparable style.  But all were justified in choosing for their material just what they chose.  They sinned artistically, now here, now there; but to complain of this old comedy as a whole, that vice in it is crammed too closely, is to forget that a play is a picture, not a photograph, of life—is life arranged and coloured—and that comedy of manners is composed of foibles or vices condensed and relieved by one another.  In so far as they overdid this work, the comic writers were artistically at fault, and Jeremy Collier was a good critic; but when he and his successors go beyond the artistic objection, one takes leave to say, they misapprehend the thing criticised.  To complain that ‘love’ and common morality have no place in satiric comedy is either to contemplate ridicule of them or to ask comedy to be other than satiric.  We know what happened when the dramatists gave way: there followed, Hazlitt says, ‘those do-me-good, lack-a-daisical, whining, make-believe comedies in the next age, which are enough to set one to sleep, and where the author tries in vain to be merry and wise in the same breath.’  These in place of ‘the court, the gala day of wit and pleasure, of gallantry, and Charles the Second!’ And all because people would not keep their functions distinct, and remember that at a comedy they were in a court of art and not in a court of law!  The old comedy is dead, and its spirit gone from the stage: I have but endeavoured to show that no harm need come to our phylacteries, if a flame start from its ashes in the printed book.

William Congreve was born at Bardsey, near Leeds, and was baptized on 10th February 1669 [1670].  The Congreves were a Staffordshire family, of an antiquity of four hundred years at the date of the poet’s birth.  Richard, his grandfather, was a redoubtable Cavalier, and William, his father, an officer in the army.  The latter was given a command at Youghal, while his son was still an infant, and becoming shortly afterwards agent to Lord Cork, removed to Lismore.  So it chanced that the poet had his schooling at Kilkenny (with Swift), and proceeded to Trinity College, Dublin, in 1685, rejoining Swift, and like his friend becoming a pupil of St. George Ashe, the mathematician.  In 1688 he left Dublin, remained with his people in Staffordshire for some two years, entered himself at the Temple, and came upon the town with The Old Bachelor in January 1692.  The Double-Dealer was produced in November 1693.  In 1694 a storm in the theatre led to a secession of Betterton and other renowned players from Drury Lane: with the result that a new playhouse was opened in Lincoln’s Inn Fields, on 30th April 1695, with Love for Love.  In the same year Congreve was appointed ‘Commissioner for Licensing Hackney Coaches.’  The Mourning Bride was produced in 1697, and was followed, oddly enough, by the controversy, or rather ‘row,’ with Jeremy Collier.  In March 1700 came The Way of the World.  The poet was made Commissioner of Wine-Licences in 1705, and in 1714 with his Jamaica secretaryship and his places in the Customs and the delightful ‘Pipe-Office,’ he had an income of twelve hundred pounds a year.  He died at his house in Surrey Street, Strand, on 19th January 1728 [1729].

One or two comments on these dates are obvious.  They dissipate the Thackerayan fable that on the production of The Old Bachelor, the fortunate young author received a shower of sinecures, ‘all for writing a comedy.’

‘And crazy Congreve scarce could spareA shilling to discharge a chair,’

writes Swift, and ‘crazy’ indicates that Congreve was gouty before he was rich.  But then, the gout was a very early factor in his life, and one may call the line an exaggeration.  Another couplet:

‘Thus Congreve spent in writing plays,And one poor office, half his days:’

probably expresses the truth.  With his plays and his hackney coaches he doubtless got through his twenties and thirties with no very hardly grinding poverty, and at forty or so was comfortably secure.  But another fact, which the dates bring out very sharply, has a different interest.  At an age when Swift was beginning to try his powers, Congreve’s work was done.  A few odes, a few letters he was still to write, but no more comedies.  Was it ill-health?...