The Colonial Mortuary Bard; "'Reo," The Fisherman; and The Black Bream Of Australia 1901 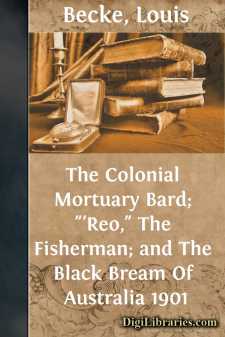 A writer in the Sydney Evening News last year gave that journal some amusing extracts from the visitors' book at Longwood, St. Helena. If the extracts are authentic copies of the original entries, they deserve to be placed on the same high plane as the following, which appeared in a Melbourne newspaper some years ago:—

"Our Emily was so fairThat the angels envied her,And whispered in her ear,'We will take you away on Tuesday night!'"

I once considered this to be the noblest bit of mortuary verse ever written; but since reading the article in the Sydney paper I have changed my opinion, and now think it poor. Bonaparte, however, was a great subject, and even the most unintelligent mortuary verse-maker could not fail to achieve distinction when the Longwood visitors' book was given up unto him. Frenchmen, especially, figure largely. Here, for instance:—

The last line is so truly heroic—French heroic. It instantly recalled to me a tale told by an English journalist who, on a cycling tour in France just after the Fashoda crisis, left his "bike" under the care of the proprietor of an hotel in Normandy. In the morning he found the tyres slashed to pieces, and on the saddle a gummed envelope, on which was bravely written, "Fashoda." This was unintentional mortuary poetry. The gallant Frenchman who did the daring deed when the owner of the "bike" was asleep did not realise that the word itself was a splendid mortuary epic for French aspirations generally.

Then comes something vigorous from one "Jack Lee-Cork," who writes:—

"The tomb of Napoleon we visit to-day,And trod on the spot where the tyrant lay;That his equal again may never appear,'Twill be sincerely prayed for many a year."

The masters and officers of some of the whale-ships touching at St. Helena seem to have made pilgrimages to Longwood. Mr. William Miller, master of the barque Hope, of New Bedford, writes that he "visited the remains of the greatest warrior of the day, interred for twenty years." Then he breaks out into these noble lines:—

"Here lies the warrior, bravest of the brave,Visited by Miller, God the Queen may save."

As a Britisher I shake your hand, William. When you wrote that, forty years ago, American whaling or any other kind of skippers did not particularly care about our nation; but you, William, were a white man. How easily you might have said something nasty about us and made "brave" rhyme with "grave"! But you were a real poet, and above hurting our feelings.

Captain Miller was evidently accompanied by some of his crew, one of whom contributes this gem of prose:—

"Louis F. Waldron, on bord the barke hope of nubedford, its boat steer, has this day been to see honey's tomb; we are out 24 munts, with 13 hundred barils of sperm oil."

All greasy luck attend you, honest Louis, boatsteerer, in the shades beyond. You wielded harpoon and lance better than the pen, and couldn't write poetry....