The Collected Works of Ambrose Bierce, Volume 8 Epigrams, On With the Dance, Negligible Tales 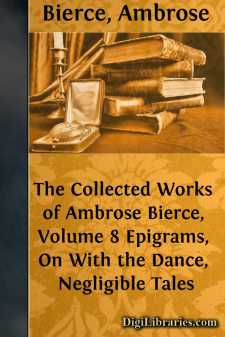 My name is John Brenwalter. My father, a drunkard, had a patent for an invention, for making coffee-berries out of clay; but he was an honest man and would not himself engage in the manufacture. He was, therefore, only moderately wealthy, his royalties from his really valuable invention bringing him hardly enough to pay his expenses of litigation with rogues guilty of infringement. So I lacked many advantages enjoyed by the children of unscrupulous and dishonorable parents, and had it not been for a noble and devoted mother, who neglected all my brothers and sisters and personally supervised my education, should have grown up in ignorance and been compelled to teach school. To be the favorite child of a good woman is better than gold.

When I was nineteen years of age my father had the misfortune to die. He had always had perfect health, and his death, which occurred at the dinner table without a moment's warning, surprised no one more than himself. He had that very morning been notified that a patent had been granted him for a device to burst open safes by hydraulic pressure, without noise. The Commissioner of Patents had pronounced it the most ingenious, effective and generally meritorious invention that had ever been submitted to him, and my father had naturally looked forward to an old age of prosperity and honor. His sudden death was, therefore, a deep disappointment to him; but my mother, whose piety and resignation to the will of Heaven were conspicuous virtues of her character, was apparently less affected. At the close of the meal, when my poor father's body had been removed from the floor, she called us all into an adjoining room and addressed us as follows:

"My children, the uncommon occurrence that you have just witnessed is one of the most disagreeable incidents in a good man's life, and one in which I take little pleasure, I assure you. I beg you to believe that I had no hand in bringing it about. Of course," she added, after a pause, during which her eyes were cast down in deep thought, "of course it is better that he is dead."

She uttered this with so evident a sense of its obviousness as a self-evident truth that none of us had the courage to brave her surprise by asking an explanation. My mother's air of surprise when any of us went wrong in any way was very terrible to us. One day, when in a fit of peevish temper, I had taken the liberty to cut off the baby's ear, her simple words, "John, you surprise me!" appeared to me so sharp a reproof that after a sleepless night I went to her in tears, and throwing myself at her feet, exclaimed: "Mother, forgive me for surprising you." So now we all—including the one-eared baby—felt that it would keep matters smoother to accept without question the statement that it was better, somehow, for our dear father to be dead. My mother continued:

"I must tell you, my children, that in a case of sudden and mysterious death the law requires the Coroner to come and cut the body into pieces and submit them to a number of men who, having inspected them, pronounce the person dead. For this the Coroner gets a large sum of money. I wish to avoid that painful formality in this instance; it is one which never had the approval of—of the remains. John"—here my mother turned her angel face to me-"you are an educated lad, and very discreet. You have now an opportunity to show your gratitude for all the sacrifices that your education has entailed upon the rest of us. John, go and remove the Coroner."

Inexpressibly delighted by this proof of my mother's confidence, and by the chance to distinguish myself by an act that squared with my natural disposition, I knelt before her, carried her hand to my lips and bathed it with tears of sensibility....