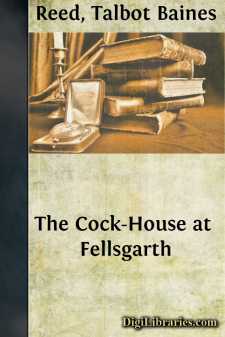 First-night at Fellsgarth was always a festive occasion. The holidays were over, and school had not yet begun. All day long, from remote quarters, fellows had been converging on the dear old place; and here they were at last, shoulder to shoulder, delighted to find themselves back in the old haunts. The glorious memories of the summer holidays were common property. So was not a little of the pocket-money. So, by rule immemorial, were the contents of the hampers. And so, as they discovered to their cost, were the luckless new boys who had to-day tumbled for the first time headlong into the whirlpool of public school life.

Does some one tell me he never heard of Fellsgarth? I am surprised. Where can you have been brought up that you have never heard of the venerable ivy-clad pile with its watch-tower and two wings, planted there, where the rivers Shale and Shargle mingle their waters, a mile or more above Hawkswater? My dear sir, Fellsgarth stood there before the days when Henry the Eighth, (of whom you may have possibly heard in the history books) abolished the monasteries and, some wicked people do say, annexed their contents.

There is very little of the old place standing now. A piece of the wall in the head-master’s garden and the lower buttresses of the watch-tower, that is all. The present building is comparatively modern; that is to say, it is no older than the end of the Civil Wars, when some lucky adherent to the winning side built it up as a manor-house and disfigured the tower with those four pepper-castors at the corners. Successive owners have tinkered the place since then, but they cannot quite spoil it. Who can spoil red brick and ivy, in such a situation?

Not know Fellsgarth! Have you never been on Hawkswater then, with its lonely island, and the grey screes swooping down into the clear water? And have you never seen Hawk’s Pike, which frowns in on the fellows through the dormitory window? I don’t ask if you have been up it. Only three persons, to my knowledge (guides and natives of course excepted), have done that. Yorke was one, Mr Stratton was another, and the other—but that’s to be part of my story.

First-night, as I have said, was a specially “go-as-you-please” occasion at the school. Masters, having called over their roll, disappeared into their own quarters and discreetly heard nothing. Dames, having received and unpacked the “night-bags,” retired elsewhere to wrestle with the big luggage. The cooks, having passably satisfied the cravings of two hundred and fifty hungry souls, and having removed out of harm’s way the most perishable of the crockery, shrugged their shoulders and shut themselves into the kitchens, listening to the noise and speculating on the joys of the coming term.

What a noise it was! Niagara after the rains, or an express train in a tunnel, or the north wind in a gale against the Hawk’s Back might be able to beat it. But then Fellsgarth was not competing; each of the fellows was merely chatting pleasantly to his neighbours....